When asked what direction the show would head next, Gimple said: “We’re currently working on some things that answer that question, so I shouldn’t answer it.”

“There’s a lot of stuff that’s cooking in the garage right now. We’re working on all sorts of things, and as the months go on, we’re going to have a lot more to say about it.” 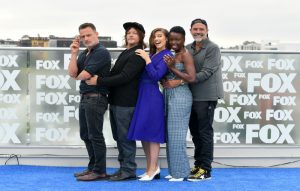 Gimple also hinted are more parallels and cross-overs between the two current series of the show, despite season 9 leaping forwards chronologically.

Speaking to Digital Spy, Gimple said: “I wouldn’t expect it all the time, but things could happen.”

“You never know who might pop up on Fear the Walking Dead, and that includes not only [characters from] The Walking Dead but even potentially people from the past of Fear the Walking Dead. You never know.” Last week, Lincoln addressed the Comic-Con audience in San Diego about his future. The 44-year-old said: “There seems to be an elephant in the room and I think many of you want to ask a question whether or not it is my last year. This will be my last season playing the part of Rick Grimes.”

He continued: “I love this show, it means everything to me. I love the people who make this show. I’m also particularly fond of the people who watch the show. It has been the most extraordinary, beautiful experience of my career, largely because of you guys.”
Rumours about Lincoln’s departure for the show have been rife for some time, especially after one of the show’s director’s posted a farewell message to the star on Instagram. The post has since been deleted.

Meanwhile, a survey of Walking Dead fans recently revealed that 44% of them said they would stop watching the show once Lincoln left.

72% of the people who completed the poll also believe that The Walking Dead should end after season nine.

The new season of The Walking Dead premiers in the UK on 7 October.