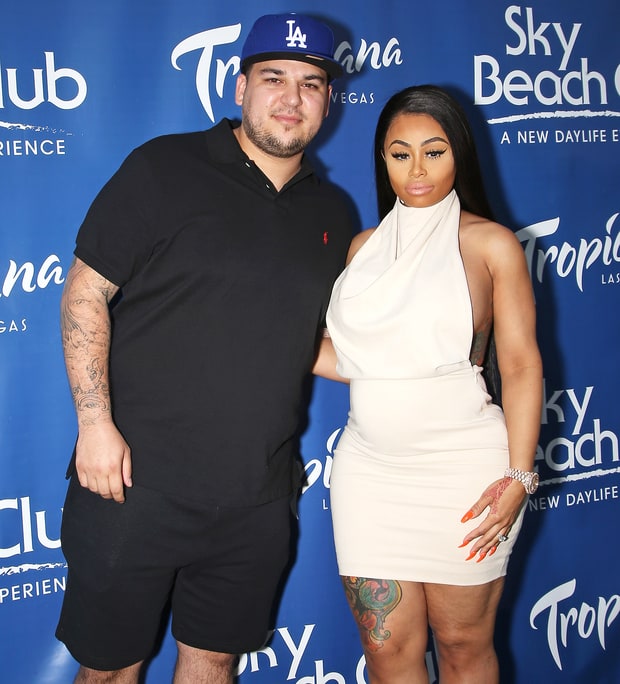 Rob, who is expecting his first child with the Lashed salon owner, deleted all photos on his Instagram except for an old photo of himself. Any and all images of Chyna have been erased, and Chyna hasn’t posted a new picture on Instagram since July 7.

The couple, who are also set to tie the knot, were active on social media ever since getting together. Chyna often posted Snapchats of her and Rob’s life together, while the Arthur George sock designer frequently shared images of his fiancée and her growing baby bump. At one point, Chyna tracked Rob’s weight loss journey on her accounts, cheering him on and motivating him to continue his successful efforts.

Although there doesn’t seem to be a trace of Chyna on Rob’s Instagram, Chyna has kept images of her fiancé on her account. But Rob has gone through social media purges before, having cleared out his Instagram a couple of times before this, so is this just another cleanse or is there something going on with Rob and Chyna?

On Friday night, Kim Kardashian opened up to E! News about Chyna and her pregnancy, telling us that the family is excited to have a new cousin. She didn’t mention anything about the social media silence.

«They have talked to me about names but I would never tell because that’s really personal to them. If they want to share that, they could,» Kim said. «But we’re just there to support them. We’re so excited that we’re getting a new cousin.»

She added, «I was FaceTiming with Chyna the other day and explaining to North [West] that there was a baby in her belly and then sharing the sonogram pictures with North and explaining to her that this is her little cousin and it’s so exciting we have a new cousin coming.»

Kim also said she was looking forward to sharing baby advice with her brother and future sister-in-law. «I think they’re just starting to get into it, but we share a ton of different baby stuff,» Kim told E! News Friday. «I think once it starts happening for them we’ll have way more tips, once the baby’s here. I’m excited to see my brother in this role as a dad. I think he’ll be an amazing dad.