Meghan Markle and Prince Harry shared a sweet kiss following the Audi Polo Challenge on Sunday. The Suits actress had watched her royal boyfriend playing polo from the sidelines of the event, which was held in support of WellChild and Sentebale. The pair were spotted embracing before leaving Cowarth Park, and looked very much in love as they smiled at each other before exchanging a smooch! 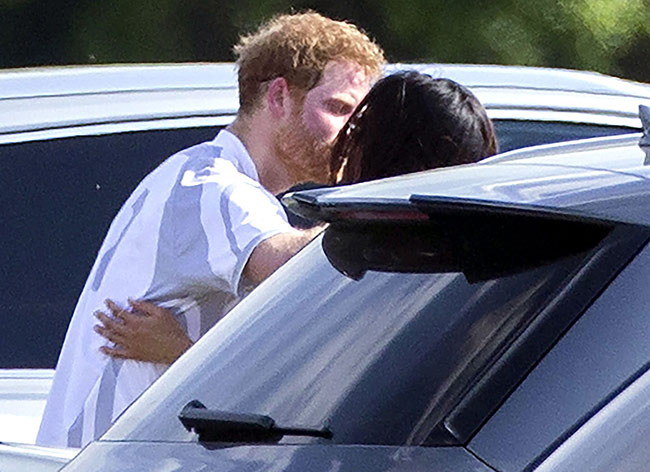 Meghan looked simply stunning at the high-profile match in Ascot. Dressed in an elegant black number by designer Antonio Barardi with a white blazer and shades, Meghan looked chic while cheering on the Prince at the exclusive event, which was also attended by Eddie Redmayne, Tom Hardy and Matt Smith. The couple have been dating for around ten months, and are believed to be attending the wedding of Pippa Middleton together on 20 May. Meghan also recently shut down her lifestyle blog The Tig and ended her role as ambassador to Canadian clothing company Reitmans which could suggest that she may be preparing for her future with the Prince.

The pair have flown back and forth from Canada to the UK to make their long distance relationship work, and have also taken getaway trips to Norway and Jamaica, where they attended the wedding of one of Harry’s closest friends, Tom ‘Skippy’ Inskip. While at the wedding, which took place back in March, the pair looked at ease while sipping on champagne at one of the tables. The Suits actress stole the show in a stunning floor-length gown, which she paired with sunglasses while Harry, who was an usher at the wedding, wore a navy blue suit with a pale blue tie and a yellow corsage.