Minaj lands her 68th appearance as featured on Ariana Grande’s «Side to Side.» 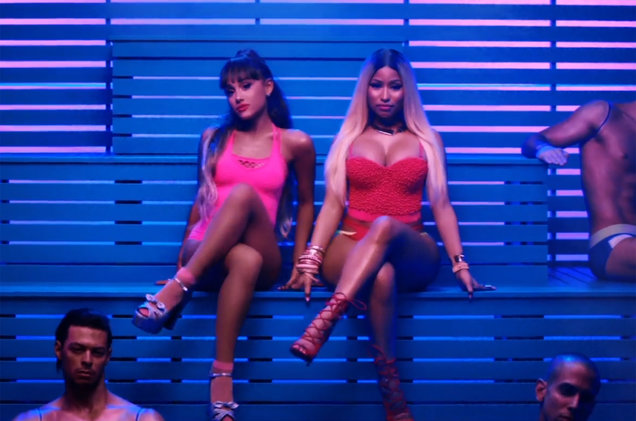 Ariana Grande and featured artist Nicki Minaj cycle onto the Billboard Hot 100(dated Sept. 17) at No. 31 with «Side to Side,» the chart’s highest debut of the week.

After their cardio-intensive performance of the track on the MTV Video Music Awards Aug. 28, partly on stationary bikes, and the premiere of its similarly themed official video Aug. 29, the reggae-leaning track speeds onto the Streaming Songs chart at No. 17 with 10 million U.S. streams, up 1,157 percent, in the week ending Sept. 1, according to Nielsen Music. On Digital Songs, it debuts at No. 26 (29,000 sold, up 2,744 percent from 1,000 sold the week before)

Notably, Minaj has been credited as a lead artist on 26 of her Hot 100 entries, or 38 percent. Swift has been the lead on 66 of her 69 charted titles (96 percent) and Franklin, all 73 of hers (with much of her career predating years in which featured billings became common).