Lady Gaga is ramping up the art pop machine again. The singer surprised her Little Monsters on Wednesday morning (Aug. 17) by posting a series of Instagram teases that created a mosaic spelling out the name of her upcoming single, «Perfect Illusion.» The singer said the song will be released in September and a source close to Gaga confirmed toBillboard that the track was produced by Mark Ronson, BloodPop, Tame Impala’s Kevin Parker and Gaga; no other information was available at press time about a specific release date or accompanying album.

Tony Bennett recently said he has been talking to Gaga about working on a sequelto their Grammy-winning Cheek to Cheek pop standards album. A spokesperson for Gaga said no additional details on the single were available at press time. 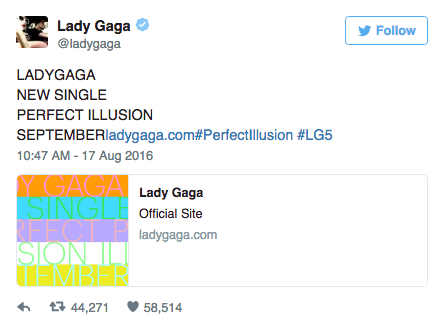 While not much is known about Gaga’s follow-up to 2013’s ArtPop, back in May producer  Ronson posted an Instagram pic of Gaga with Bloodpop and Tame Impala’s Parker in the studio with the caption «illusion.