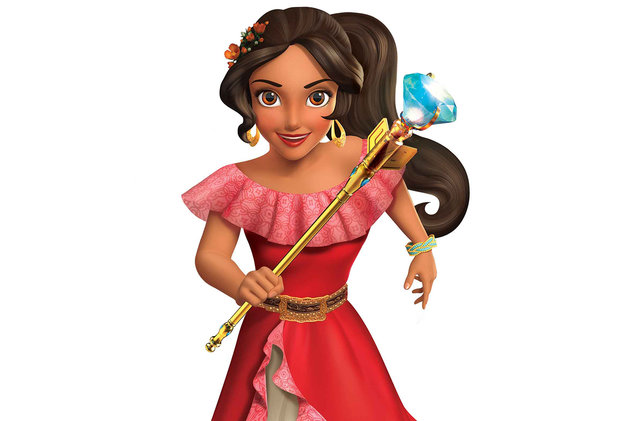 Merengue, salsa, son montuno, vallenato, cumbia and reggaeton, as well as variations of Latin rock, folk and, of course, upbeat pop are just some of the musical styles that animate the soundtrack of Elena of Avalor, the new Disney Channel show featuring Disney’s first Latina princess.

“The way that music is so important to the show reflects how important it is to the culture,” says Craig Gerber, the creator and executive producer of Elena, which has its premiere on July 22. Gerber also writes lyrics for the show’s songs.

In addition to being Disney’s first Latina princess, the 16-year-old Elena is the first princess who plays guitar, which Gerber notes is a nod to music’s pervasiveness in Latin America.

“In the first episode, Elena and her grandfather have a musical debate while they are both playing guitar about whether she’s ready to be queen yet,” Gerber reveals. “We let two different styles of music inform that song: banda and contrapunteo.”

Gerber’s knowledge of genres like contrapunteo, a traditional acoustic vocal battle with improvised verses, was gleaned over the course of creating Elena. Veteran bassist Rene Camacho, who has toured with Robi «Draco» Rosa and War, among other artists, is the show’s musical consultant.

“Proud Chicano” composer Tony Morales created an underscore for the show, which “marries Disney music with the Latin sound.” The show’s sonic landscape includes mariachi and flamenco-inspired guitar, Cuban and Brazilian rhythms, Chilean and Peruvian influence and “a whole gamut of percussion,” for what Morales describes as a “pan-Latin folk sound as if played by an orchestra.»

“We were very careful to pick the right inspiration,” Morales adds. “The great thing is that it’s a TV series: There are a ton of adventures, and there’s so much more we can do as we go.”

The diverse music mirrors Gerber’s approach to creating a show inspired by Latin America and Spain. “It was a challenge for us to create a fairytale Latin-inspired kingdom that felt authentic but that drew from a lot of different countries and traditions,» he says. “In creating Elena, it was important to be more inclusive than exclusive.”

Gerber learned some lessons about the Latino audience from his last project, the Disney Junior Emmy-nominated hit series Sofia the First. After it was reported that the light-skinned, blue-eyed Sofia was Latina, there was criticism from Latino groups and others who said that her appearance and character were, essentially, not Latina enough. Disney responded to the backlash by calling Sofia “a mixed-heritage princess in a fairytale world,” not the first Latina princess.

This time, Elena is olive-skinned with dark brown hair. While Gerber confirms that she is definitely the first Latina princess, he makes a pre-emptive strike by stressing that in the Disney tradition, Avalor is a fairytale kingdom, not a true representation of a real place. He adds that some Spanish is spoken in the kingdom of Avalor.

“We tried to make it relate to the modern-day situation in America, where this generation of Latinos speak primarily English,” Gerber says. “So the younger characters in our show speak English, and the older characters speak English with an accent, and there are words of Spanish peppered throughout: terms of endearment, words about food or commonly used phrases.”

The versions of the show for Latin America and Spain will be dubbed into Spanish.

“The focus of the show is more about culture than language,” Gerber stresses, explaining that the Elena episodes contain frequent references to Latin American folkloric tales and celebrations.

In one episode, Elena — voiced by Dominican-American actress Aimee Carrero — celebrates the Day of the Dead, singing a song that both honors the Mexican holiday and gives a lesson about its meaning to kids who haven’t experienced it.

“The song is called ‘The Festival of Love,’ and it’s an upbeat merengue tune,” Gerber says. “It’s the happiest song about death you’ll ever hear.”

During a Christmas episode, Latin Grammy-winning singer/songwriter Gaby Moreno performs a Puerto Rican-style holiday song for Elena’s celebration. Moreno, who also voices a character in the Christmas show, sings the Elena de Avalor theme song. Moreno’s albums, which Gerber played “over and over” when he was writing the show, served as inspiration for its Latin musical fusion.

Camacho, Elena’s musical consultant, says he has presented the creative team with “the wide range of different Latin styles that you can possibly listen to today,” from Latin America and the different regions of the U.S.

For Camacho, who also performs on the soundtrack, the exposure that Elena of Avalorwill give a broad audience of Latino and non-Latino kids in the U.S. to diverse Latin sounds is an important part of the show’s message.

“The main thing is that the music is out there now,” he says. “On television, that doesn’t happen very often in the U.S. I think it’s super important for kids today to be able to identify with that music. And for someone as big as Disney to be putting it out, that’s huge.”