While Congress alleges otherwise, activists and DREAMer supporters fear that some 800,000 young undocumented immigrants brought to the U.S. as children will lose status and become eligible for deportation.

In the wake of Sessions’ announcement, which has already sparked a political firestorm, Spotify creates a playlist, No Moment for Silence. The playlist lives on Spotify’s ongoing platform for breaking news around social issues and it features commentary by artists who are both immigrant and/or allies to DREAMers. The likes of Daddy Yankee, Demi Lovato, Camila Cabello, Jared Leto, Logic, Becky G, Juanes and Khalid share personal messages of support with the community, in hopes of driving listeners to learn more and take action.

Camila Cabello: “As an immigrant who came to the US as a child, I know what it’s like to struggle and to never take any opportunity that came my way for granted. I stand with DREAMers, who have fought so hard to be recognized as the Americans they are.”

Khalid: “With having lived in a border city, I have so many friends whose families could possibly lose their legal status in the country that they grew up in. Please stand for the DREAMers and let them know that they are not alone, and that they have our support.”

Juanes: “The US is a country that belongs to you too. You’re here because destiny brought you here. You have to keep fighting to stay. You can count on the support of an entire community that’s here for you.”

Jared Leto, 30 Seconds to Mars: “Obviously, supporting people who are Americans and have lived in this country is important, and protecting them from losing their legal status in the country they grew up in is paramount. So I ask for your support for DREAMers, and I pledge mine.”

Becky G: “Especially for immigrants, so much youth has come here to the United States of America at an age where they weren’t even old enough to decide and they were given this opportunity to make something of themselves…I feel like if we could just respect and appreciate one another, that already is the biggest form of support.”

Daddy Yankee: “We cannot be silent. DREAMers can’t be deported. It’s time to raise your voice. This is their home.”

Demi Lovato: “I encourage each and every one of you to support and stand for immigration. For everyone out there who is fighting for this cause, I encourage you to stay strong.”

Logic: “Hey, it’s Logic, and I’m here to support DREAMERS – everyone in this country deserves our support, across all races, genders, ethnicities — no matter where you are from.”

Other celebrities and members of the political sphere at large took to social media to voice their concerns, dismay and support, including Mark Zuckerberg, Lauren Jauregui, Tinashe and more: 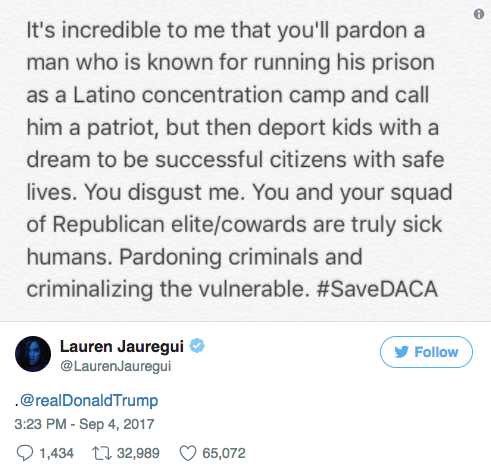