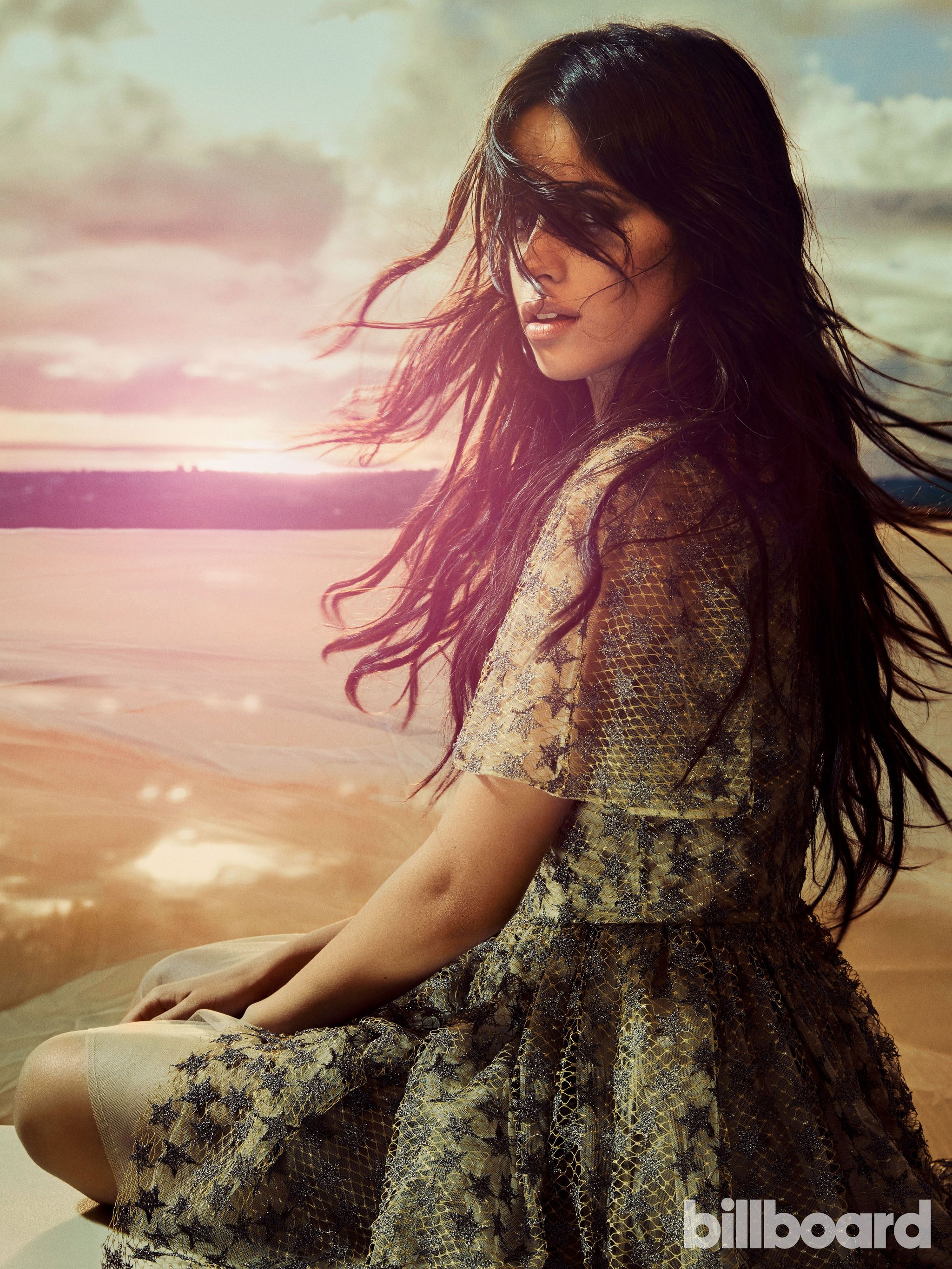 CAMILA CABELLO IS LATE FOR BRUNCH. But not sullen, rock-star, hiding-behind-shades late. More like 19-year-old, mixed-up-the-address late. She’s running through the dining room of Versailles, a Cuban restaurant deep in Los Angeles’ San Fernando Valley, lush black hair streaming, apologies pouring forth, having just rushed from the otherVersailles, in the city’s center. As soon as she sits on this mid-January Sunday morning, flashing that disarmingly broad smile, the singer — who was born in Cuba, resides in Miami and is staying in an Airbnb here in town — says, “I’ve got you on what we’re going to eat.” She then proceeds to order, in rapid-fire Spanish, a bounty of food: lemonades, steaks, rice, beans, plantains, croquettes, flan.
Confusion, stress, the promise of a splendid feast: That has pretty much been the story of Cabello’s recent life. It was only a month before this weekend that she was still a member of Fifth Harmony, the most successful girl group since Destiny’s Child, with more than 7 million digital songs sold, according to Nielsen Music. Before the year was out, she was a solo artist weathering accusations from her bandmates (namely, that she quit through her representatives after dodging a series of label interventions and therapy sessions) and even hate-tweets from zealous fans (see: #CamilaIsOverParty).

But that’s the confusion and stress. During that same time, Cabello had plenty to celebrate. The singer, who had collaborated outside of 5H for some time, released the darkly sexy rap-romp single “Bad Things” with Machine Gun Kelly last October, and it climbed the charts. (It’s now No. 1 on the Mainstream Top 40 Chart.) And that’s not even her first hit: “I Know What You Did Last Summer,” her 2015 duet with Shawn Mendes, peaked at No. 20 on the Billboard Hot 100. She has social numbers to rival the band’s (3.4 million to 5H’s 3.8 million on Twitter and 8.8 million to 8.2 million on Instagram), a guest turn on a Major Lazer song banked and enough studio time booked to successfully capitalize on what seems, in retrospect, like an inevitable transition to solo stardom. “It would take a big force to stop her from taking over the world,” says her friend Mendes, adding, “She was such a great writing partner. I barely had to speak and she knew exactly what I meant.”

But Cabello, whose album is due this fall, already had fame, fortune and obsessive fans. The true gift, after five years of nonstop touring, recording and meet-and-greets with 5H, is the taste of freedom. “You know that quote, ‘In the silence, you find God?’ ” asks Cabello, who — in her lace choker, a holey white tee and a black marching band coat — looks like the petite (she’s 5-foot-2) commander of some fun and fashionable army. “I felt like I could hear everything my heart was telling me.”

The heart, of course, can be an unreliable guide, and by going solo Cabello is risking more than the slings and arrows of unhappy Harmonizers. (5H fans — who easily overrun fan polls, like the one for the MTV Video Music Awards’ 2016 Song of the Summer contest, in which “Work From Home” crushed massive songs by Calvin Harris and Drake — are not to be underestimated.) Only one woman has recently left a girl group for a colossal solo career, and she’s not an ordinary human: She’s Beyoncé. The closer models for Cabello may be her fellow talent-show contestants in One Direction. But none of their trajectories will quite work for a woman who has to, as it seems all young female pop stars must, thread the wholesome-and-sexy needle. Zayn Malik disavowed his past, graffitied his home, cloistered himself in a weed cloud and took his sweet time on an album, all of which only made him cooler. Niall Horan took a backpacking trip, rediscovered the ’70s folk-rock of his youth and launched a career as a troubadour, which just made him dreamier. Harry Styles is already considered a rock star without having sung a solo note.
This article originally appeared on Billboard.