Britney Spears shaded Taylor Swift in a new interview Monday morning and didn’t even realize it. While talking on the Kyle and Jackie O Show, Britney played an innocent game of «Who Would You Rather» where she had to pick and choose between some of Hollywood’s A-listers such asOprah Winfrey or Ellen DeGeneres. But when asked to compare two fellow pop stars, the «Make Me» songstress slipped.

«Who would you rather sit next to on a 24-hour flight to Sydney, Taylor Swift or Katy Perry?» the hosts asked.

Seems innocent enough, right? Well, fans were quick to point out that Britney has met T. Swift on more than one occasion. The two singers met at the 2008 MTV Video Music Awards where they posed together for a photo, and they also met years before that before Taylor became a famous entertainer in her own right. Twitter circulated the fan photo as soon as Britney answered the question. 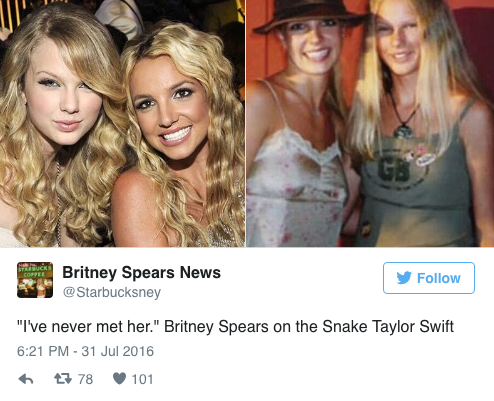 Although Britney’s answer threw some shade Taylor’s way, it’s obvious that Britney made a simple mistake and was by no means intending to begin a feud with the «Style» singer. This exchange, however, does remind us of Mariah Carey and Jennifer Lopez’s ongoing feud, which stemmed from the «Heartbreaker» singer claiming she and J.Lo have never met. But in May Carey put the issue to bed while on Watch What Happens Live.

«That was so long ago,» she said. «I can’t believe people still make such a big deal out of it.»

«If I had never had a conversation with you and someone asked me about you, I’d be like, ‘I don’t know him, but he seems cool’ or ‘I don’t know him'» the newly engaged star explained to host Andy Cohen. Pushing the issue, Cohen then asked if she thought J.Lo seemed «cool.» Carey had no words.

«I don’t know her,» Carey echoed. «What am I supposed to say? I’m not going to put on a thing like we’re all Hollywood and let’s pretend we’re best friends.»