It was the meeting wanted ‘round the world.

On the beam, Simone Biles is a four-time Olympic medalist who has captivated international attention for her gymnastic prowess. Behind the scenes, she caught the eye of one major celebrity fan—Zac Efron.

Months before the start of the 2016 Olympic Games, she appeared on the Ellen DeGeneres Show to confirm her secret crush on the Hollywood hunk. «Is it just ‘cause he’s gorgeous, is that why you like him?» Ellen DeGeneres asked. Her one-word answer? «Yes!»

Her crush drew national attention as even NBC’s Nightly News could not avoid the subject, airing footage of her personal life-size Efron cutout safely kept behind her childhood bed.  «Sometimes I used to kiss him on the cheek,» Simone told NBC’s Stephanie Gosk. Soon, the two were exchanging tweets, but from thousands of miles away.

Finally, after weeks of mounting public anticipation, NBC secretly arranged for the two to meet face to face for the first time Tuesday night.

«I totally have butterflies right now,» Efron admitted to Hoda Kotb backstage while watching Biles perform her gold-winning routine in the floor exercises. In fact, the actor got teary-eyed as Simone was honored with her fourth Olympic medal and the National Anthem played out. «That’s so good,» he said under his breath. 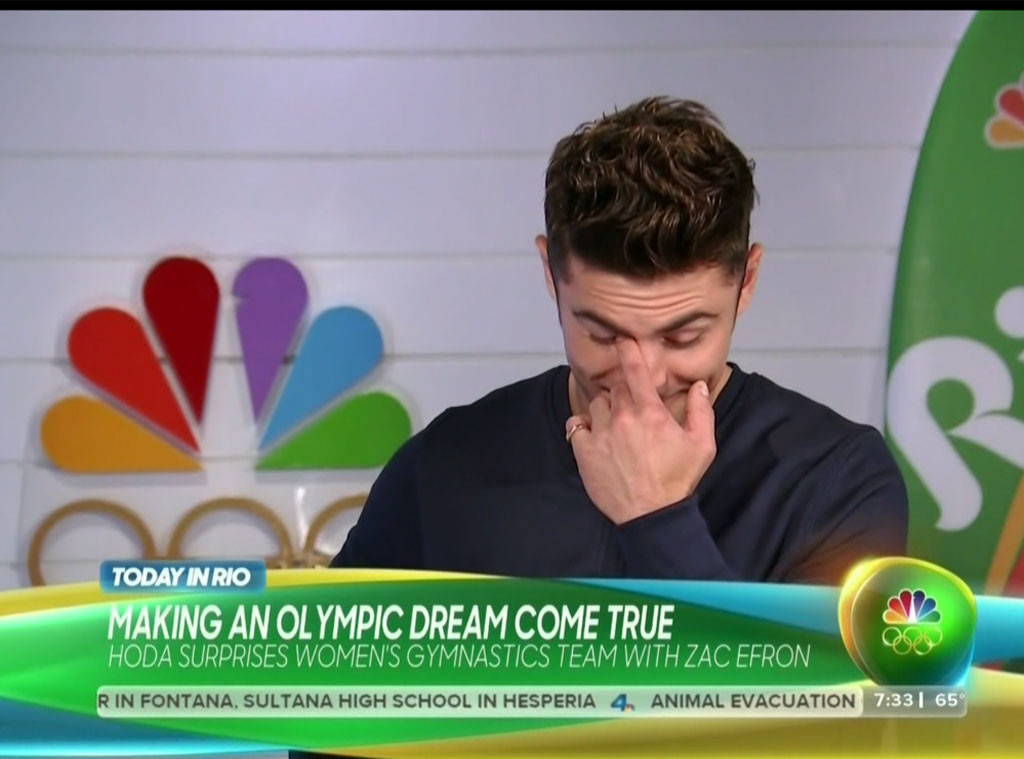 However, Biles gave Efron’s reaction a run for its money when it ultimately came time for the grand surprise unveiling. While the 19-year-old has kept cool, calm and collected throughout the international competition, meeting the Neighbors star ignited quite a different response.

«If you bring him out, I think I’m going to pass out,» she warned Kotb before Efron entered the room. Queue the screaming! «I’m shaking,» she said repeatedly, visibly elated and shocked. «He’s even more gorgeous in person,» teammate Laurie Hernandez whispered to Biles.

Rest assured, ladies—Efron was a bit nervous, too. «»They just got off the world’s biggest stage, won gold medals. They’ve been crushing it the entire Olympics and I was hiding in the closet waiting to come in, so I didn’t know what to think. I was kind of getting nervous myself,» he told Kotb and Matt Lauer on Today.

As for planning the big surprise, the actor just didn’t want to watch from the couch anymore.

«When I found out Simone and this team were fans, I was like, ‘What kind of guy am I if I don’t show up?»’ he told Kotb and Lauer.

It’s clear from the ladies’ faces—they sure are glad he did.