Justin Bieber was spotted shirtless at a soccer match with friends in Los Angeles on Saturday, while Selena Gomez was seen out on a night on the town.

Wearing a Tom Petty and the Heartbreakers crop top and red wrap skirt, the 25-year-old «Come and Get It» singer was photographed that night outside the West Hollywood restaurant and bar the Nice Guy, a celebrity hot spot.

Earlier this month, multiple sources told E! News that Justin and Selena have been spending time away from each other. The two had rekindled their past romance last fall. They were last seen in the same location, leaving church, on March 7, several days after Justin’s 24th birthday.

«Justin has been upset about the recent break from Selena and is trying to keep busy until they work things out,» a source told E! News last week. «It wasn’t his choice for them to split, and he is really taking time to focus on himself right now. He has been working out every day, focusing on church and being out and about with his friends.»

Here’s what Justin and Selena have been spotted doing amid their «break»: 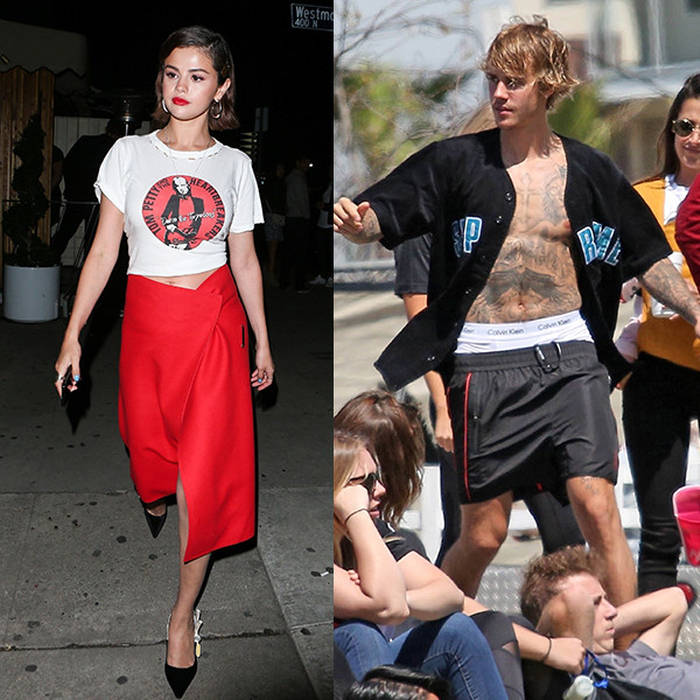 March 16: Justin, Schwartzenegger, Abby and her sister Baskin Champion go clubbing together. Earlier in the day, Selena is photographed riding a bike in Los Angeles with a friend.

March 17: Selena is all smiles as she’s photographed walking in Beverly Hills on St Patrick’s Day.

March 19: Selena begins a trip to Australia. She is spotted hanging out on a yacht in Sydney with friends.

March 20: Justin makes a surprise appearance onstage at Craig David‘s concert at the Roxy in Los Angeles. Justin attends the show with several people, including Baskin. They are photographed leaving the venue in the same car.

«Justin has been hanging out with Baskin,» a second source tells E! News, adding that the two went back to his house.

Thank you L.A for the amazing energy tonight for my @TS5 show @theroxy 🙌🏽🙌🏽🙌🏽 Special thanks to @justinbieber for passing through and showing so much love & for the kind words on stage✨👏🏽 #TheTimeIsNOW 🎥 Thanks @dperezaudio