«Never in the history of gender reveals have I seen Power Rangers,» mom-to-be Shay Mitchell said as the Blue and Pink Rangers duked it out

Shay Mitchell learned the sex of her baby in quite the unconventional way, as shown in a video she shared to her YouTube channel on Thursday titled “Do NOT Try This Gender Reveal at Home.”

The clip begins with the Pretty Little Liars alum, 32, telling her doctor during a routine appointment that she and boyfriend Matte Babel were planning on finding out the baby’s sex later that night.

“I truly think that I’m having a boy because … just the retribution of having a girl,” a robe-clad Mitchell tells the camera further on in the video. “My parents would just look at me and be like, ‘Karma, bitch.’ It’s a boy.”

Right before the big reveal, the parents-to-be call on their loved ones to take a poll about whether they think the baby is a boy or girl. The final tally? Six to two, in favor of girl.

As Mitchell and Babel, 38, sit outside to wait for the news (as well as how they’re even going to find out!), a Blue Power Ranger emerges from an upstairs door, leading the couple to believe their baby is a boy.

But a wrench is soon thrown in the mix when the Pink Ranger appears — and the two immediately begin to duel in a fight to see whose color would represent the little one’s sex.

“Power Rangers. Never in the history of gender reveals have I seen Power Rangers,” Mitchell says between laughs and gasps of shocked delight.

The hilarious scuffle ends when the duo fall into a water fountain, and only one emerges to greet Mitchell and Babel: the now-unmasked Pink Ranger, who makes her way over and sits on their laps (still all wet!) by way of greeting.

“Is it a girl?!” both ask excitedly, still a bit confused about the outcome — but viewers aren’t left hanging, as “IT’S A GIRL” flashes across the screen, with the Pink Ranger striking a victorious pose.

“YAS queen 😍😍😍 I am so excited to be a mama with you and welcome this beautiful babe to the world!” Troian Bellisario — who welcomed a daughter with husband Patrick J. Adams in October — commented on Mitchell’s Instagram announcement. 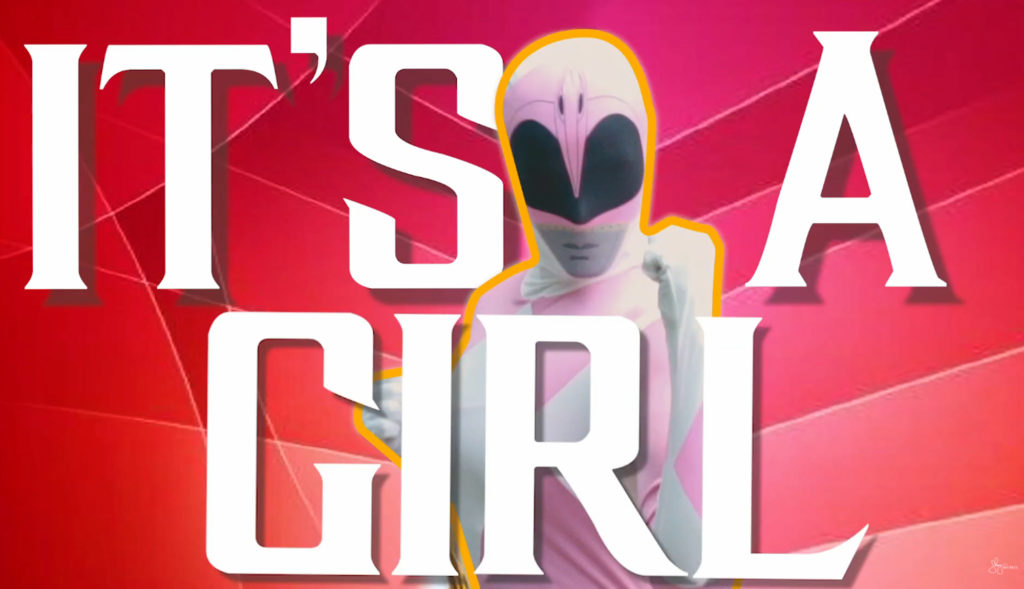 This article was originally written by: People