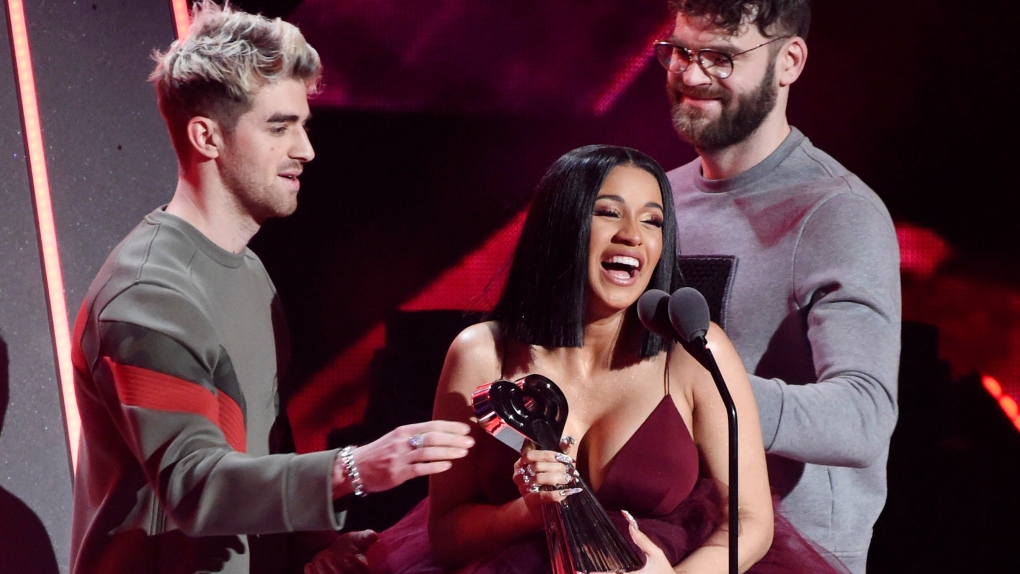 Last night (March 11) the 2018 iHeartRadio Music Awards took place in Inglewood, California, and they were a star-studded affair. Hosted by DJ Khaled and Hailey Baldwin, the evening celebrated musical achievements across a variety of genres. With an impressive four victories, Ed Sheeran ended the night as the most-awarded musician. He took home trophies in categories including Song of the Year, Male Artist of the Year and Pop Album of the Year. He also beamed in a performance of his latest chart-topper, “Perfect,” from Australia.

Although she missed the show in order to continue preparations for her upcoming stadium tour, Taylor Swift took home the trophy for Female Artist of the Year and premiered the cheery video for her new single, “Delicate.” Cardi B was selected as the Best New Artist and the Best New Hip-Hop Artist of the Year and announced the imminent release of her debut album, while Kendrick Lamar and Luis Fonsi made strong showings in the hip-hop and Latin categories respectively.

Things went international this year as a slew of acts from across the globe took home trophies. K-pop royalty BTS easily swept the Best Boy Band category, and their fans were recognized as the Best Fan Army. Anitta was recognized as the Social Star, and many of the boys of One Direction won awards. Harry Styles received a nod for his “Sign of the Times” video, Niall Horan got several nods for “Slow Hands” and Louis Tomlinson was recognized as the Best Solo Breakout. One of the highest honors of the evening went to Chance the Rapper, who was selected for the iHeartRadio Innovator Award and delivered a rousing acceptance speech.

The 2018 iHeartRadio Music Awards also included a bevy of high-octane performances. Cardi opened the show with a massive medley of her greatest hits while Maroon 5 showed some love to their latest release, “Wait.” Eminem brought out Kehlani for a fiery rendition of “Nowhere Fast,” and rock legends Bon Jovi lit up the night with another medley before the Pharrell Williams-fronted N.E.R.D.closed out the show with a dance-heavy performance of “Lemon.”

The most-anticipated moments of the night went to Camila Cabelloand Charlie Puth. The former paid tribute to Madonna with a pretty-in-pink performance of her chart-topper “Havana,” while the latter brought out a memorable rendition of “How Long.” Scroll through a list of winners in major pop, hip-hop and R&B categories below and keep an eye peeled for any performances as they are released!

Song of the Year: “Shape of You” – Ed Sheeran

Best Duo/Group of the Year: Maroon 5

Rock Album of the Year: One More Light – Linkin Park

Country Album of the Year: From a Room: Volume 1 – Chris Stapleton

Dance Album of the Year: Memories…Do Not Open – The Chainsmokers

Best Collaboration: “Something Just Like This” – The Chainsmokers feat. Coldplay

Alternative Rock Song of the Year: “Feel It Still” – Portugal. The Man

Country Song of the Year: “Body Like A Back Road” – Sam Hunt

Dance Artist of the Year: The Chainsmokers

Producer of the Year: Andrew Watt

Most Thumbed-Up Song: “Shape Of You” – Ed Sheeran