Even with the $2 trillion stimulus package passed by the Senate on Wednesday, millions of Americans are expected to file for unemployment next week as the cascading economic damage wrought by the COVID-19 pandemic continues to devastate the economy. It might be weeks before the $1,200 government checks arrive in mailboxes and even then they’re not likely to ease the pressure for long for those out of work indefinitely.

Taylor Swift has a plan for that. The singer is reaching out with her own Swiftie Stimulus checks to some of her long-time fans, and they are in awe of her generous gesture. Billboard can confirm that there were at least 10 such payments made by Swift on Wednesday (March 25).

«OHHHHH MY F–KINGGGGFFF SHUT HP SHUT UPS BUT IP SHUT UP THIS CANT BE HAPPENING I CANT STOP SHAKONT I CANT STOP CRUING WHAT THE FUCK TULORLRL,» wrote Samantha Jacobson, who posted a message she got from Swift in which the singer wrote, «Samantha, I saw your tweet about being stressed about bills piling up and I want to help.»

The singer asked for the best way to gift Samantha $3,000. According to EW, Jacobson is a longtime fan who lost her job as a cocktail server at Disney World for at least 30 days after the bar she works at was forced to close because of the novel coronavirus that has killed more than 1,000 Americans to date.

Another fan named Bernadette tweeted on Wednesday, «the one where your favorite person on earth casually calls you bernie” THANK YOU FOR BEING THE BEST FRIEND EVER @taylorswift13 hejejsjfjajjf icannotbreathe,» along with a similar request from Swift for her information so she could send another $3,000 check. 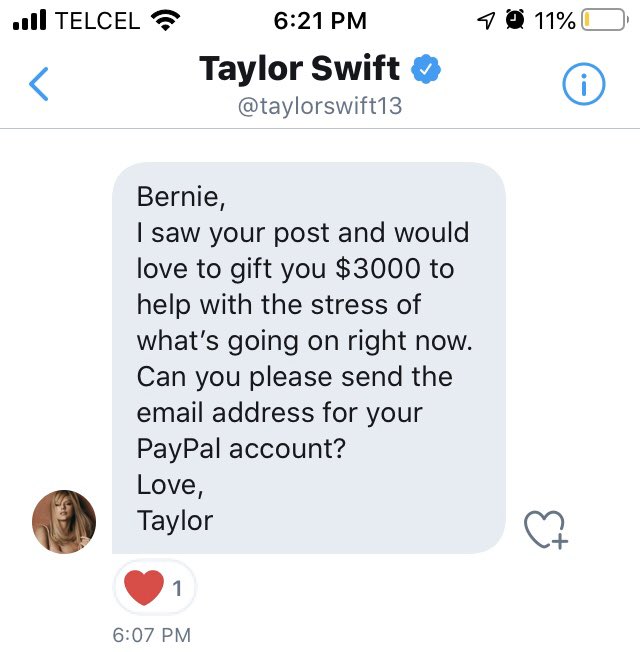 Swift also seemingly spotted a post from fan and music photographer Holly  Turner, who said she wrote on Tumblr about her fear that she wouldn’t be able to keep living in New York because of the huge impact the coronavirus has had on the music industry.

i made a post on tumblr about how i was scared i wouldn’t be able to stay living in NYC because of what corona has done to the music industry. @taylorswift13 literally single-handedly saved my ability to stay here. i cannot even believe my eyes right now 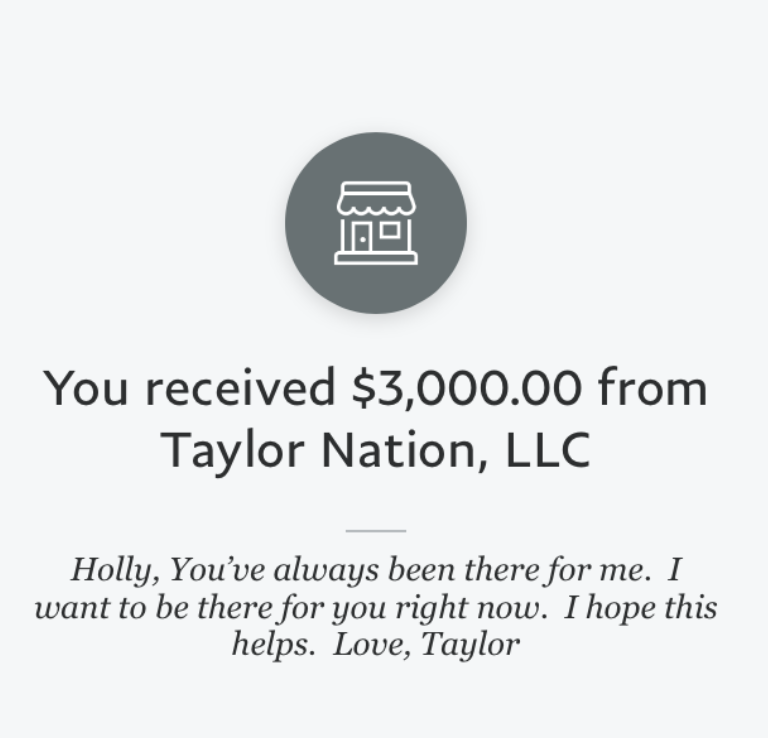 Check out a few other screenshots of Swiftie Stimulus donations.

Taylor has messaged a fourth fan on twitter about donating money to help her get through this tough time of #COVIDー19.

Taylor donated $3,000 to another fan who needed financial help due to #COVIDー19!