We’ve been patient, and the Queen has rewarded us. Taylor Swift is back with a new album, which she announced on Aug. 23 via social media. Here’s what we know!

Taylor Swift, 27, has officially returned, and we are shook. The singer announced on Aug. 23 that she would be dropping her next album Reputation on Nov. 10, and our hearts skipped more than a beat at the news. Is it not Christmas?

It all started when Taylor’s social media accounts and website went dark on Aug. 18, which just happens to be the 3-year anniversary of “Shake It Off,” as well as the date she announced her album 1989. Fans noticed that her tweets, Instagrams, Facebook and Tumblr posts had mysteriously disappeared, along with all of her avatars and header photos. Everyone immediately began freaking out, of course, and many speculated that #TS6 — meaning her 6th album — was on its way. Well, now we know!

Taylor has been quiet over the past few months, apart from her high-profile groping trial, which began after the popstar accused David of “sticking his hand under [her] skirt and grabbing [her] ass” at a meet and greet in 2013. A jury found DJ David Mueller guilty of “assaulting and battering” Taylor in an Aug. 14 verdict, and it was a huge victory for the singer, who had countersued him for a symbolic $1. “I want to thank Judge William J. Martinez and the jury for their careful consideration, my attorneys Doug Baldridge, Danielle Foley, Jay Schaudies and Katie Wright for fighting for me and anyone who feels silenced by a sexual assault, and especially anyone who offered their support throughout this four-year ordeal and two-year long trial process,” Taylor said in a statement. 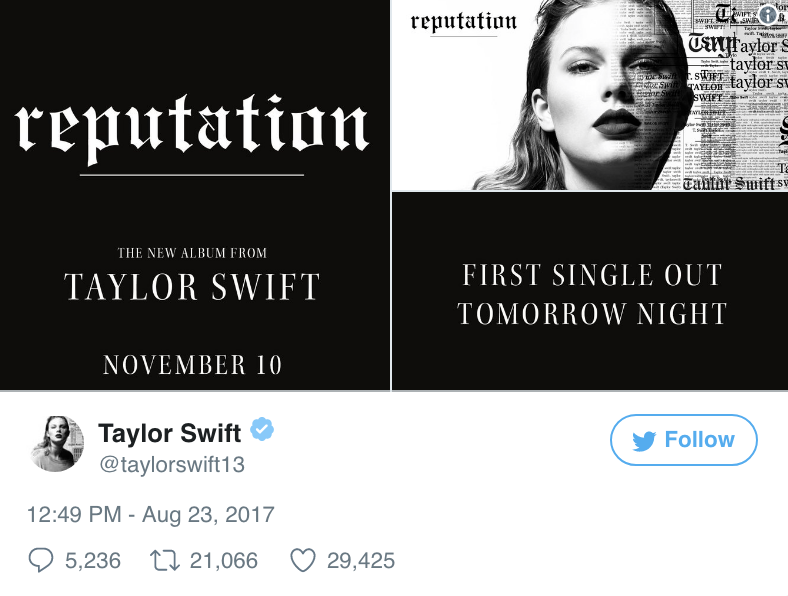