«Duffel bags full of drugs and a rocket,» the Weeknd mentions in his new single, «Heartless,» setting the tone for a man that can’t be tamed, and the theme transcends into his new video.

The clip, which dropped on Tuesday (Dec. 3), sees the crooner at a blurry night out in Las Vegas, stumbling out of a car into the casino, where he indulges in gambling, drinking and smoking. Halfway through the dizzying night, the singer comes face-to-face with a frog symbolizing drugs. He partakes, and the night gets even fuzzier. Weaved with trippy visuals, the Weeknd is seen running down the street before the fun gets to him, ultimately bending over to puke.

«Heartless,» as well as his other new single «Blinding Lights,» are the crooner’s first new music since the EP My Dear Melancholy arrived in March 2018 and his 2016 full-length LP Starboy.

Watch the music video below.

Coachella heated up this past weekend as exes, The Weeknd and Bella Hadid were reportedly all over each other! The pair were caught kissing on April 13, while Bella ‘sat on his lap.’ Are they back together?!

True love always finds it way back! And, that seems to be the case for exes, The Weeknd, 28, and Bella Hadid, 21, who were spotted kissing at the Coachella Valley Music and Arts Festival in Indio, California, Us Weeklyreports. The pair, who split in November 2016 after two years of dating, “were canoodling and being affectionate as she sat on his lap” during Travis Scott‘s set at Poppy nightclub’s pop-up debuting Kylie Cosmetics’ Kourt x Kylie makeup line on Friday, April 13. “They are 100 percent back together,” an eyewitness tells the mag.

“They were completely all over each other,” a separate eyewitness says. Bella and The Weeknd “kissed a couple of times and Kylie and Kendall Jennerwent over to their table for a bit as well.” Gigi Hadid, 22, who recently split from her boyfriend, Zayn Malik, was also at the party with her sister.

This is quite a turn of events, considering that we’ve also heard that The Weeknd was also spotted getting extra cozy at Coachella with Chantel Jeffries, one of Justin Bieber‘s exes, in a closed off VIP section of the festival. Between Abel bouncing between ladies and Justin getting into brawls, it looks like was a good idea on Selena Gomez‘s part not to hit up Coachella this year. A wine weekend with her girlies was definitely the way to go.

The Weeknd has us seeing in shades of blue with his melancholic “Call Out My Name” video. The moody single emerged as a clear fan-favorite off the crooner’s recently released My Dear Melancholy, EP. On streams and digital sales alone it debuted within the top 5 of the Billboard Hot 100, and its new video will likely give it the push to soar even higher on the charts. The Frank Dukes-produced single is an emotional breakup anthem. “So call out my name. Call out my name when I kiss you so gently. I want you to stay. I want you to stay even though you don’t want to,” he laments on the downtempo chorus.

Released today (April 12), the Grant Singer-directed video plays off the track’s downtrodden vibes. Opening on a dark city street, The Weeknd delivers brooding looks underneath a street light. As things progress, he incorporates more dark imagery including a storm of bats, battling animals and flames. Through it all, he serves desolate looks that perfectly capture the song’s message. There is a sense of longing to the visual, and it is sure to become a hit with its memorable special effects and striking imagery. On Spotify alone, “Call Out My Name” has impressively racked up nearly 65 millions streams. If things continue the way they’re going, we may be listening to the new number one single in America. Give the video a spin up top! 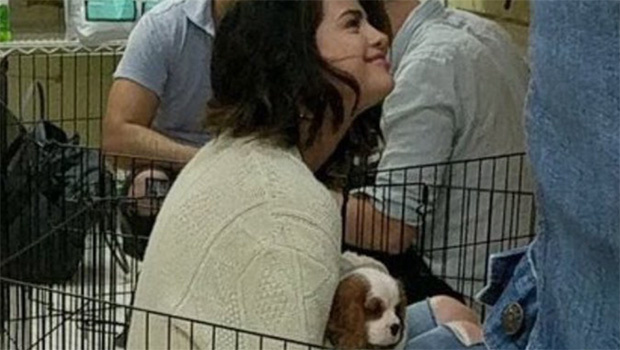 Are you ready to see the cutest puppy ever?! It looks like Selena Gomez and The Weeknd may have just adopted a Cavalier King Charles Spaniel pup, after visiting a NYC pet store on Sept. 2.

We love ALL dogs, but this dog that Selena Gomez, 25, and The Weeknd, 27, may have just adopted could be our favorite puppy ever. Seriously — it’s like the cutest animal we’ve ever seen. Anyway, here’s the scoop… as we told you, Selena and her boyfriend played with a bunch of puppies in a New York City pet store, Citipups, on Sept. 2. And it now looks like they may have picked one to adopt, as Selena was then pictured snuggling up to a puppy that her assistant was seen carrying into her apartment on Sept. 7. If they did, in fact, adopt this little puppy, then that is one lucky dog! 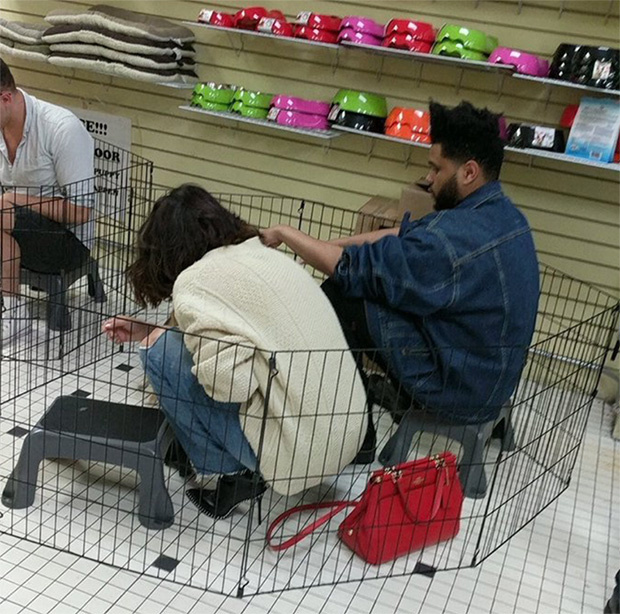 “I walked into a pet store just to play [with] the puppies and Selena Gomez and the Weeknd were just chillin, also playing with puppies,” one Twitter user wrote after the singers visited the store. “They both looked so happy.” Another twitter user also said “So I wanted to go see Stonewall and we stopped at a little [pet] store and Selena Gomez and The Weeknd are in here, playing wit puppies!” Isn’t that adorable?

We must note that this wouldn’t be Selena’s first puppy. She actually has six dogs, according to Get Leashed magazine, but this would be the first one she’s sharing with boyfriend The Weeknd. And her getting a pet with a boyfriend wouldn’t be a first time thing either. Selena previously adopted a husky named Baylor, while on a trip in Canada with her ex, Justin Bieber, 23!

Anyway, take a look at Selena’s assistant carrying the puppy into her apartment, below!