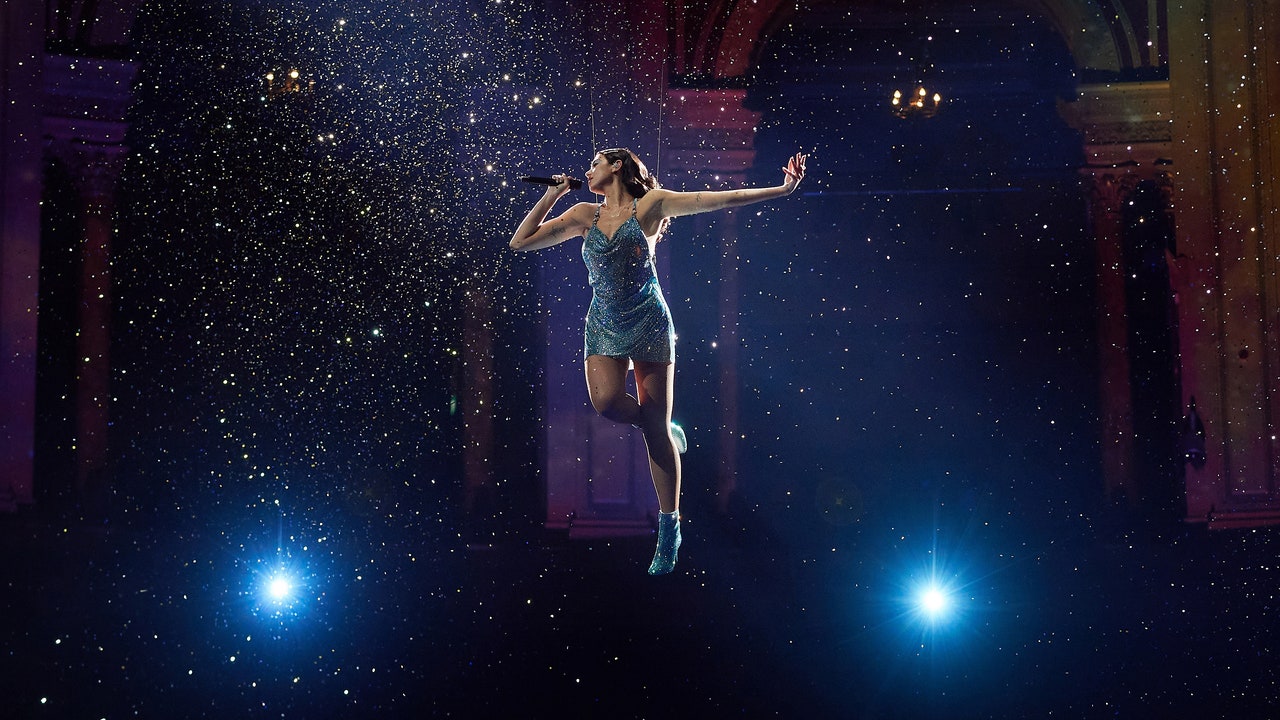 When the pandemic first hit and normality was pulled out from under our feet, Dua Lipa’s second album ‘Future Nostalgia’ was one of the first new records to provide some escape. A series of infectious and fun disco gems, it brought the glitzy, sticky thrill of nights out into our homes, urging you to push the furniture aside, turn the lights off and forget all your new pandemic fears.

Seven months on, with the UK back in lockdown and coronavirus still commanding the globe, the pop star has found a new way to take us out of this moment. For her first livestream concert, Lipa has built an alternate reality – one where you can still run wild in a warehouse all night, indulging in excess and ecstasy, running from one room to another in search of the perfect soundtrack to your nocturnal adventures.

Dubbed Studio 2054, it’s an aesthetic wonderland of neon and glitter, sequins and mirrorballs, and its creator performance elevates it from pretty place to pop paradise. She begins on a podium for ‘Future Nostalgia’, dancers grooving around her as she sets the tone for the night with the playful, alluring track. The sublime ‘Levitating’ offers up the first glimpse of a choreographed routine, Lipa and her troupe matching the song’s light-hearted lyrics with equally fun moves, while, later, ‘Cool’ pairs gentle yearning with the star being transformed into the entertainment at a roller disco.

Although Lipa could more than craft and control this fantasy land by herself, it’s a special occasion and she’s roped in some friends to help out. FKA Twigs previews the duo’s collaboration ‘Why Don’t You Love Me’ for the first time, spinning seductively around a pole and whispering, “Why don’t you love me anymore?” over a minimal, glitchy beat. Towards the end, Studio 2054’s architect joins her and things change gear, their voices rasping as they yell: “You hurt me in a world like this / You’re dead when I say so.”

During a segment that takes things into a grimy club, Kylie Minogue drops by to deliver her own sultry disco track ‘Real Groove’ before helping out on Lipa’s Silk City collab ‘Electricity’. DJ The Blessed Madonna, who helmed the recent remix album ‘Club Future Nostalgia’, commands the decks, mixing Gwen Stefani’s ‘Hollaback Girl’ with ‘Physical’, and Belgian singer Angèle crashes Dua’s dressing room to bring the sticky, bilingual pop of ‘Fever’ to the night.

There’s no shortage to the star power to help Lipa out with her big night, though one guest feels shoehorned in. After ‘Electricity’, Elton John appears on a screen, playing a beautiful version of his classic ‘Rocket Man’. Before he finishes, though, he’s cut off, the cameras panning to another part of the warehouse where Lipa launches into ‘Hallucinate’. With no link to the rest of the set, it ends up feeling random – at best, like a room you’ve temporarily dipped into to find lost friends; at worst, a filler while Lipa takes a breather and changes outfits. It’s a missed opportunity to see what a team-up between a legend and one of pop’s current greats would look like.

That slight blip aside, Studio 2054 goes some way to completing Lipa’s evolution from good to great that started with the release of ‘Future Nostalgia’. Although the routines on show tonight aren’t the most complex, they flesh out her performance enough that now she has the songs, the personality and the presence that all true icons possess. Hopefully next time we get to witness them, we’ll no longer need her to use them to transport us out of our own homes.