Michael Jackson’s daughter, Paris, will never forget the bond she shared with her late father.

Tuesday, Aug. 29, would have been the King of Pop’s 59th birthday, and in remembrance of her dad, Paris shared an adorable father-daughter moment on Instagram, along with a heartfelt message.

birthday wishes to the love of my life, the one person who showed me what passion truly was, the one that gave me solid morals to live by and how to dream. i will never feel love again the way i did with you. you are always with me and i am always with you. though i am not you, and you are not me, i know with all of my being that we are one. and our souls will never change in that way. thank you for the magic, forever and always.

«Birthday wishes to the love of my life, the one person who showed me what passion truly was, the one that gave me solid morals to live by and how to dream,» she wrote. «I will never feel love again the way I did with you. You are always with me and I am always with you.»

Paris, 19, added, «Though I am not you, and you are not me, I know with all of my being that we are one — and our souls will never change in that way. Thank you for the magic, forever and always.»

In addition to the flashback photo, Paris also posted an image of herself on the red carpet at Sunday’s MTV Video Music Awards, and superimposed her father kissing her on the forehead.

This isn’t the first time Paris has paid tribute to the music legend. In June, she got yet another tattoo in her dad’s honor.

«With every step I take, you lift my foot and guide me forward. Love you ?,» she captioned a photo which showed the word «Apple Head» tattooed on her left foot. Apple Head was a nickname given to Michael by his children and fans.

During a text interview with Teen Vogue, Michael Jackson’s 19-year-old daughter gets quite candid about her interests, dreams and advice.

When asked what she would tell her younger self if given the chance, Paris admits: «Probs that it’s OK to not be OK. Don’t be so hard on yourself. And stop comparing everyone else’s ‘highlight reel’ to your ‘behind the scenes.’ Please don’t give up, because it gets better, and it gets beautiful.»

She also shares a message for her fellow teens. «We are all warriors in our own way, but it’s up to you whether you decide to fight or sit idly, whether you’re a part of the right cause or not,» Paris declares in her texts. «And don’t just follow everything that comes up on your phone or computer screen. Look up to something honest, strong, brave, loving, and worthwhile. Oh, yeah…and stick it to the Man!!!!!!!!»

Paris plans to stick to her fledgling career in entertainment, but has another goal in mind than just becoming a household name. «I want to use my platform for something other than that. I want to actually make a difference,» she explains. «So everything that I’m doing — the acting, the modeling — it’s all just to grow my platform so I can use my voice for things that matter.»

In addition to modeling and acting, Paris says music is her «number one favorite form of expression,» noting that she hopes to «get better at writing» songs. As for whom she’d love to write for, she admits, «Definitely Paul McCartney.»

«He’s the love of my life,» she gushes over the 74-year-old music icon. «I actually already wrote a song I’d like him to sing, but it probs won’t happen.»

McCartney collaborated with Paris’ father on several songs in the ’70s and ’80s, including “Say Say Say,” “The Girl Is Mine,” “Girlfriend,” and “The Man.” However, in 1985, the King of Pop outbid McCartney for The Beatles’ back catalog. The collection was rolled over into a joint venture that Michael formed in 1995 with his Sony-based label, Sony/ATV Music Publishing, and in January, McCartney sued the company, seeking to reclaim copyrights to his band’s 267 songs.

Despite differences that may have come up between her dad and McCartney in the past, Paris still has a lot of love for The Beatles and other classic bands and musicians. «[Music has] gotten me through the toughest of times and the best of times,» she tells Teen Vogue. «It’s brought me comfort when I was alone and has brought even more joy when I’m in good company. Music is everything to me.» 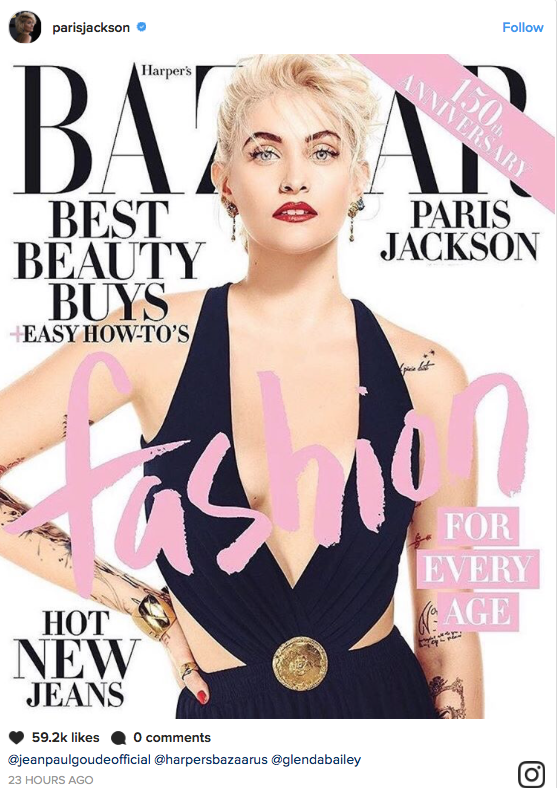