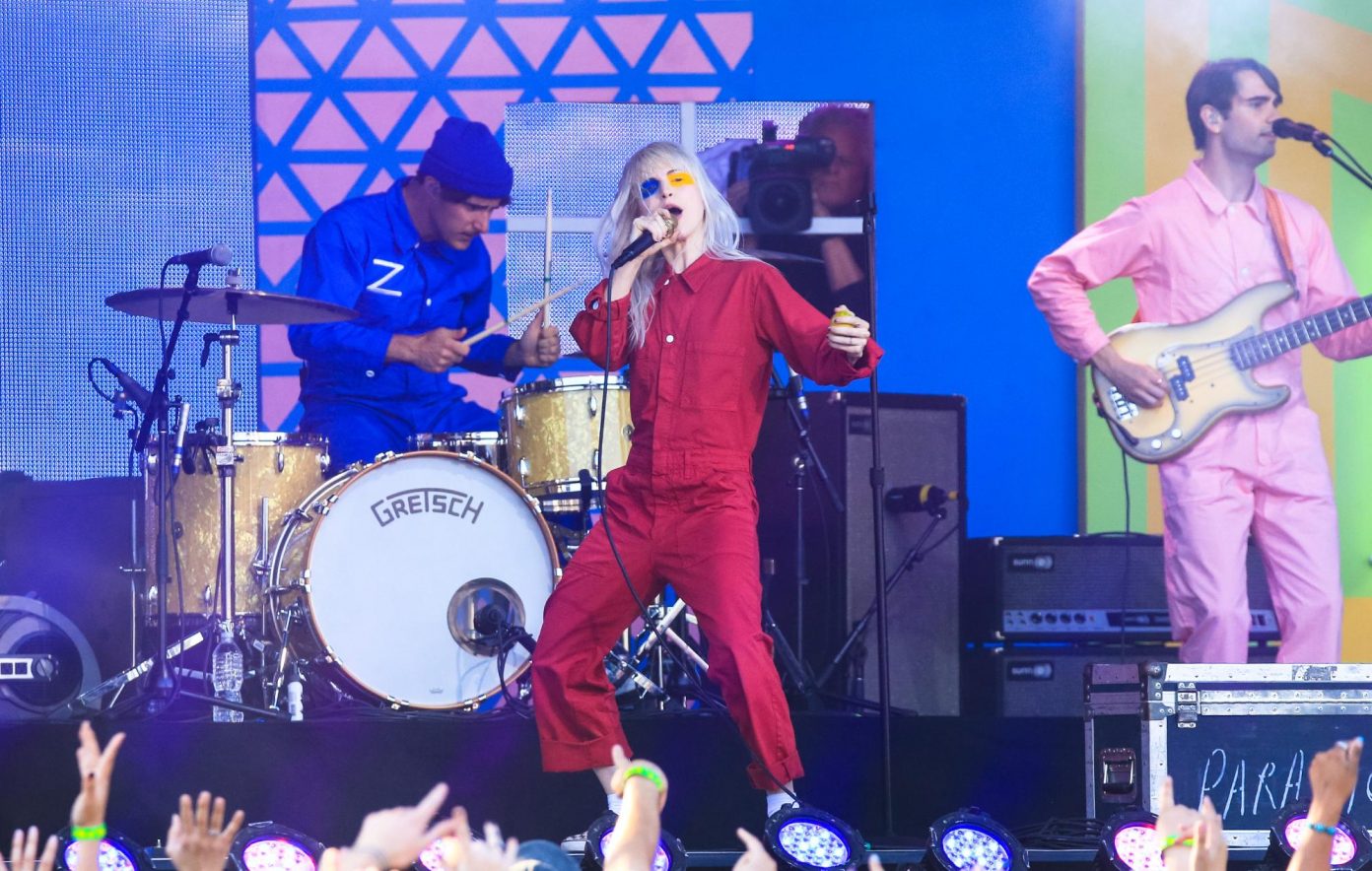 Hayley Williams has said she has no plans to make another solo record but will instead turn her focus back to Paramore.

The singer-songwriter, who released her second solo album ‘Flowers for Vases / descansos‘ earlier this month, told fans online that she’s ready to work on the next Paramore record.

When asked if she has unused songs for her solo work and whether she’d consider using them for Paramore, she replied on Twitter: “There are more songs, yeah. but I’m not planning on another solo album. and I’m not sure if they’d be great for Paramore. I’m ready for the next Paramore album. let’s go.”

there are more songs, yeah. but I'm not planning on another solo album. and I'm not sure if they'd be great for Paramore. I'm ready for the next Paramore album. let's go. https://t.co/J6nBAO5PIe

In January Williams reassured fans that the band aren’t breaking up in light of her recent solo efforts.

Confusion arose when Williams shared a link to a collection of essays written by fans of her debut solo album ‘Petals For Armor‘. “Long read, especially if you’re not a fan of me/my solo album lol,” part of Williams’ comment read, to which a fan responded: “Omg I thought paramore was breaking up.”

The singer clarified that wasn’t the case by replying in a quote tweet: “lol y’all been worried about that too long. aint happening.”

Williams also opened up recently to Zane Lowe about feeling “proud” of her achievements over the past 12 months. She also spoke about playing all the instruments on her new album, the importance of therapy and detailed how she made a “heartbreak” album during coronavirus isolation.

Paramore’s last album was 2017’s ‘After Laughter’. They’ve released five studio albums to date since 2005’s ‘All We Know Is Falling’.

In the spring of 2017, Hayley Williams moved into the first home where she’d ever lived alone. Earlier that year, she had finished recording After Laughter, her fifth album with Paramore, and broken up with her longtime partner, New Found Glory guitarist Chad Gilbert. “Half of me was very drawn to the romanticism of this artist who has had success but now is living in this small cottage by herself, and there’s these huge fucking spiders and bats,” Williams says, laughing over tea at the Bowery Hotel in New York. “The other half of it was that I was really lonely. I had a lot of shame, ’cause I realized, ‘Whoa, you are 28, and you have never just taken care of yourself.’ ”

Williams had spent half her life in a state of organized chaos, touring and recording and touring again. Soon after moving in, she went back on the road with Paramore, another distraction before the real personal reckoning happened.

“[After Laughter] helped me accept that there was a lot of shit bubbling under the surface that I was probably going to have to eventually answer to,” she says. “But it wasn’t until we came off the road in late 2018 that I realized how bad it was.”

Openness does not come easily for Williams. Now 31, she spent her formative years growing up and learning in the public eye and facing a very passionate fanbase. Paramore began when she was 15, a couple of years after her mother’s divorce led to a move from Mississippi to Franklin, Tennessee. Once there, she met brothers Josh and Zac Farro, who became the band’s guitarist and drummer. Together they caught a timely wave of pop punk and emo hitting the mainstream in the mid-2000s, and Williams became the most successful woman in a sea of eyeliner-clad men.

Now, with the band on a short hiatus, she’s embarking on her scariest, loneliest endeavor yet: her solo debut, Petals for Armor. “This is the first time that I am seeing my name everywhere, and it kind of gives me heebie-jeebies a little bit,” she says, mentioning a Times Square billboard she saw before our interview. “My name doesn’t look like a name, to me, that you would see on a marquee. I also feel like Paramore is half, if not more, of who I am.”

Williams initially signed with Atlantic Records in her teens as a solo artist, though she never released an album that way before now. As Paramore took off, she became an in-demand guest vocalist on hit songs by Zedd (“Stay the Night”) and B.o.B. (“Airplanes”). But she always insisted on being billed as “Hayley Williams of Paramore” on those songs. “I wanted to promote the band through those opportunities,” she says.

Petals for Armor began in her unfurnished, possibly-haunted Nashville home after Paramore’s yearlong theater and arena tour for After Laughter. Williams had planned to take time off, but her therapist encouraged her to start writing again. “She would always say, ‘Don’t judge what you are feeling,’ ” the singer says. “I have a tendency to do that.”

Williams found herself writing about the impact of her parents’ divorce on her own relationships, the various forms of abuse the women in her family have experienced (“Simmer”), and the creepy house she grew to love (“Cinnamon”). Soon she began to feel as if she were finding catharsis for a lifetime of depression and mistakes. “I felt like this should live somewhere, otherwise it’s not going to feel like I have released it from myself,” she says.

The most sensitive subject on the album is the way her relationship with Gilbert began, when she was 18 and he was still in a previous marriage. “In ‘Dead Horse’ I admit to having an affair — that’s how I got into my longest relationship,” she says. “I felt shame for all of my twenties about it, but being able to admit it made it less scary. It didn’t own me anymore. It gives people a chance to actually know me and decide if they like me or not.”

The guilt she carried caused personal health issues for Williams. It’s hard for her to look at photos from when she was 18 and “see the difference in my eyes,” as she describes it. Those feelings of shame affected how she handled the band’s strenuous touring schedule, and she says they “put a wedge” between her and the rest of Paramore from early on.

“We literally grew up together,” she says somberly. “We went through everything together. Suddenly, I couldn’t talk to them. I felt like I knew what they would say about me.”

At the time, the band was already struggling to adjust to the fame they’d gotten from their breakthrough single “Misery Business” and the album it came from, Riot!

“We weren’t getting along anyways,” she adds. “We were a bunch of teenagers thrown into a van, put on MTV. The world was looking at us like we had found the golden ticket. We were like, ‘I am tired and I want to go sleep on my bed.’  I am happy to say now, as adults, who are more accepting of our darkness and more accepting of our differences, we are a lot better friends to each other.”

Williams and Gilbert got married in 2016, just before they hit their decade mark together. She chooses to be vague discussing her now ex-husband, wanting to avoid “a lot of phone calls” later, but links their sudden wedding in part to the lingering effects of her own parents’ divorce, and how it left her “fucked up.” She wanted legitimacy and to put a band-aid over the still-unresolved affair that launched their relationship.

The emotional stress affected her body, much like it did when she was 18. Williams had begun to distance herself from her friendships, too. When she recorded the song “Pool” for After Laughter, she says, the pain, unhappiness, and clinical depression she had been ignoring finally came to the surface. Bandmate Taylor York had given her the music to “Pool” a year before she finally wrote the lyrics.

“I was like, ‘This is going to be a love song. I’m going to prove to everyone that this is marriage and I am in love,’” she recalls. She laughs at the final product, a story of constantly diving in to something only to keep sinking. “I had been hurt a lot. You can’t do the same thing over and over and over again and expect a different result.”

Much of Petals for Armor feels like a continuation of the work that Williams began with her band on After Laughter — only this time, with the help of space and therapy, she can both grieve and move on with clarity. She structured Petals for Armor in three distinct parts, with the songs moving from dark into light in both subject matter and sound. That pattern reflects her own recovery from all the trauma that resurfaced as she made the record.

“I don’t think you can get to the good shit without digging through the bad first,” she says. “It’s like you are trying to find the center of the Earth — how can you find that without cracking through limestone and heavy, hard things?”

Lately, she’s surprised herself with how easy happiness can feel. “Once you get through it, you find water flowing,” she says. “Once I broke through deep enough, things started pouring out. I was surprised to find that there was, like, good shit in it. Happier shit.”