Produced by Duke Dumont, the housey “Swish Swish» opens with the meaty sample which fills up Fatboy Slim’s 2000 club tune «Star 69». «Swish, swish, bish/Another one in the basket/Can’t touch this/Another one in the casket,» Katy sings.

Nicki holds up the mirror and lets fly with a rap: «Pink Ferragamo sliders on deck/Silly rap beefs just get me more checks/My life is a movie, I’m never off set.»

Witness is due to drop June 9 on Capitol Records and will include the already-released tracks “Chained To The Rhythm” and the Migos-featuring “Bon Appétit.» Perry and Minaj will team up again for the Calvin Harris tune “Soft Lips.” Listen to «Swish Swish» below. 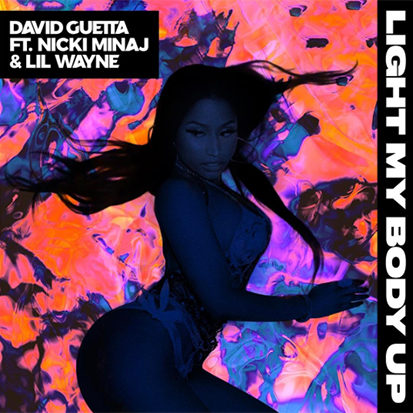 Nicki Minaj joins forces with David Guetta for the fourth time on new single, “Light My Body Up” (due March 23). The duo have an incredible track record. 2011’s “Where Them Girls At” peaked at number 14 on the Billboard Hot 100, but their other two collaborations, “Turn Me On” and “Hey Mama,” cracked the top 10. This time around, they rope in Lil Wayne for a little extra flavor. That’s all I know about the project at present, apart from the fact that it boasts a trippy cover (above).

The French DJ has been rolling out new singles, potentially from his upcoming 7th LP, since early 2016. He teamed up with Disciples on “No Worries” and scored a global smash with Zara Larsson-voiced soccer anthem, “This One’s For You.” That hit was followed by “Would I Lie To You” and recent Robin Schulz collaboration, “Shed A Light.” It will be interesting to see if “the winning team,” as David put it on Instagram, still has the midas touch. We’ll know in two days.