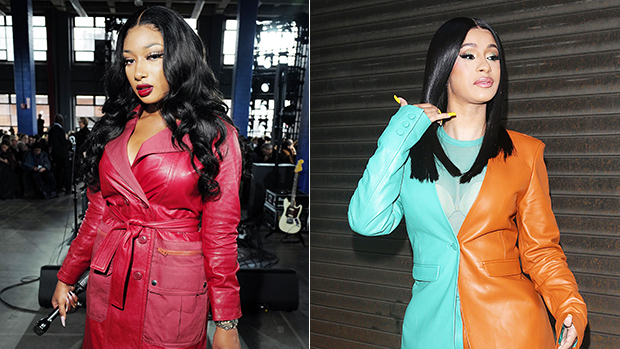 After fans accused Megan Thee Stallion of dissing Cardi B by liking shady comments about her, Megan took to Twitter to set the record straight!

Let’s get one thing straight: There is NO beef between Cardi B and Megan Thee Stallion. Although fans thought they had uncovered the latest rap feud by accusing Megan ‘liking’ negative comments about Cardi on social media, the “Hot Girl Summer” singer made it clear that there’s NO drama between the women. “I did not like no damn stupid a** comment like this,” Megan wrote on Twitter. “I don’t even upload my own s*** to my YouTube, my label does.”

She also went on to explain that she isn’t here for any drama. “I DON’T HAVE A PROBLEM WITH ANYBODY,” Megan added. “I don’t like drama. I do not bring other females down. Stop trying to start fake beef.” Rumors of a Megan/Cardi feud began when fans apparently noticed that Megan’s YouTube account was ‘liking’ shady comments from fans about Cardi on her page. Some of the comments included, “She exceeded Cardi” and “I’m guessing y’all females leaving Cardi B in 2019.”

However, it looks like Megan is placing the blame on her record label, 1501 Certified Entertainment, for the disses. This is not the first time that she’s had an issue with the label — earlier this year, she sued 1501 after they blocked her from releasing new music. She explained that she was young when she signed her contract with the company, so she did not know what she was agreeing to. It wasn’t until she signed with new management that she was made aware of the stipulations she had signed up for.

I did not like no damn stupid ass comment like this. I don’t even upload my own shit to my YouTube my label does. I DO NOT HAVE A PROBLEM WITH ANYBODY. I don’t like drama I do not bring other females down stop trying to start fake beef. https://t.co/5dNhisDddW

Megan was granted a temporary restraining order against the record company and its CEO in March. The label attempted to dissolve the restraining order, but was denied by the courts. Megan went ahead and released her EP, Suga, on March 6, once everything was resolved.