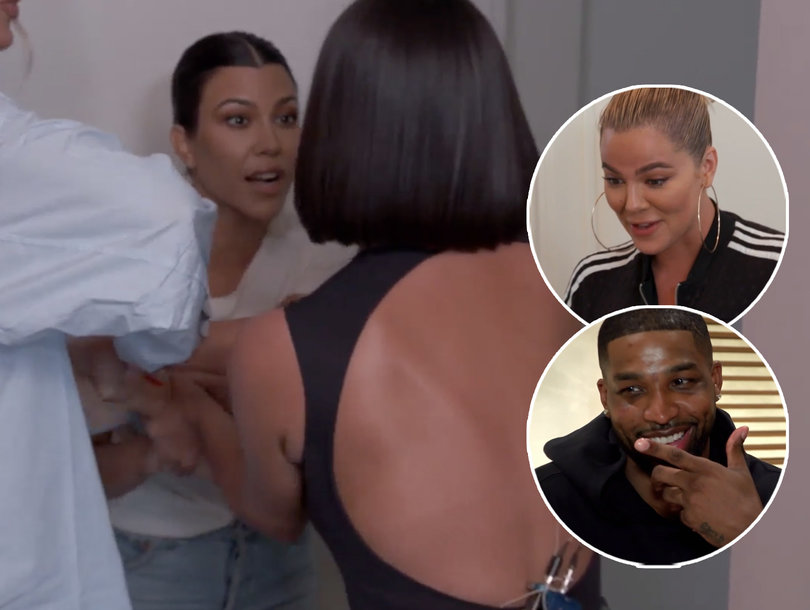 The Season 18 premiere ended with an explosive throwdown between two sisters, which Nori calls «a direct result of their gluten-free diet.»

The woman behind Nori’s Black Book — a viral parody Instagram account written entirely in the voice of Kim Kardashian’s sassy 5-year-old daughter — is bringing her talents to TooFab.

Each week, «Nori» will be recapping new episodes of «Keeping Up with the Kardashians» and giving us HER take on all the family drama.

(NOTE: The below was not actually written by North West.)

After Kim and Khloe Kardashian’s vacation in the Bahamas with their kids, Kim hit New York for Fashion Week and to do press to promote the launch of her shapewear line, SKIMS, and the launch of her KKW collection with supermodel Winnie Harlow.

While in the car headed to dinner, Kim got a call from Khloe’s baby daddy and habitual cheater, Tristan Thompson. He told Kim he was in New York and he just saw her. Kim was surprised to get his call because even though they’re not feuding anymore, they’ve never been close either. Nevertheless, Kim invited Tristan to dinner.

It’s interesting to see mommy trying to move in a positive direction with Tristan. I won’t be, but it’s cute for her. – NW

After her call with Tristan, Kim Facetimed Khloe to tell her that Tristan called her and she invited him to dinner. Kim said that even though she brutalized him, she has decided to forgive him because he’s True’s dad and it’s what’s best. She referenced that Kris Jenner cheated on their dad and all of their friends forgave her, so it’s the same thing. Khloe said that it’s nice of Kim and she was beyond generous for inviting him to dinner. Khloe said the dinner sounded awkward.

When will we be forgiving and invite Jordyn to dinner? She’s Stormi’s mom! Do I not understand these rules? -NW

Back in LA, Kylie Jenner visited her Kylie Cosmetic Office. She felt amazing now that she’s 22, but she said that she feels like she’s 47. Kris updated her about her upcoming collaboration with Balmain and Olivier Rousteing. Balmain would be using the Kylie Cosmetic products on the models in their Paris Fashion Week show, which Kylie would walk in and close. Kylie and Kris agreed that the collaboration would be big for Kylie Cosmetics.

Kourtney Kardashian took a month-long vacation in Italy, but she returned to work soon after. Her assistant ran through her schedule for her day and she had a lot going on including filming KUWTK and shooting in her home for Architectural Digest. She had anxiety knowing she wasn’t going to have any real privacy and that 40 people would be in her house.

The idea of having to work in order to earn money can be triggering when you don’t do it on a regular basis. – NW

Kourtney told Khloe that she hated her hair, she was over glam, and she didn’t want to film and maybe not film ever again. Khloe was speechless. Khloe said that Kourtney could’ve quit, but she didn’t and now they were right back where they left off which was confusing.

Khloe recommended to Kourtney that she should start her day with a prayer of gratitude, but Kourtney is visibly uninterested in what Khloe was talking about. Kourtney ignored Khloe, checked her phone and said, «I just have so much to do,»

Even though Auntie Kourt is ridiculous, I can’t blame her for not listening to Auntie Khloe. No one should be taking advice from someone who bedazzles Febreeze bottles. They’re clearly unstable. – NW

Back in New York, Kim announced to her friends that she invited Tristan to dinner. They were in disbelief. Tristan showed up alone and everyone was super friendly with each other and cracking jokes. Kim explained to the dinner table that she and Tristan used to not get along but now that’s over. Kim was pleased that dinner went well and it wasn’t awkward at all. Khloe FaceTimed Kim after to see how everything went and Kim assured her that the dinner went well and that they really like Tristan now.

Mommy’s friends at dinner were very D-List, so Tristan fit right in. When LaLa Anthony is the most famous person at the table you know it’s bad. – NW

Back in Calabasas, Kim, Kourtney, and Khloe all discussed the bill from their Costa Rica trip for North’s birthday. Kourtney was mad that she was the only one being sent a huge bill instead of production, since they filmed the trip for the show. Khloe jumped in and gave an opposing opinion, which upset Kourtney because she felt like Khloe was taking production’s side and not hers. Kourtney told Khloe not to involve herself, but Khloe said that if she can’t be involved then don’t talk about it around her.

To be clear, Auntie Kourt was the only one charged because she was not invited. She also refused to do glam or film the majority of scenes while on the trip. So yes, you received an invoice. Costa Rica was a work trip. You weren’t working, so production, nor myself will be covering your expenses. Take it up with HR. – NW

At Kylie’s house, Kendall Jenner helped Kylie create a look for the Balmain models for her Kylie Cosmetic collaboration. Since Kendall is a supermodel, Kylie wanted to practice her makeup looks on her and get advice from her on how to walk the catwalk.

If Auntie Kylie wanted to learn how to walk the catwalk she should’ve asked a real model. – NW

Later at Khloe’s house, Tristan came to visit with True. Khloe has an open door policy for Tristan to see their daughter whenever he wants. Tristan was supposed to go inside and eat with the kids, but Kim invited him to eat outside with her, Khloe, Kourtney, and Kris. Given their history, Khloe was surprised that Kim extended an olive branch to Tristan again. Khloe wasn’t completely comfortable because she hadn’t had a dinner with Tristan without True since they broke up. She wanted to set boundaries because it’s still a delicate time period. She wished she was asked first before Kim invited him to eat with them.

Tristan was in a lot of scenes this episode. I see where this is going. I’ve had to draw up a lot of contracts for many boyfriends in my day. I’ve also terminated many contracts. – NW

In Paris, Kris was getting ready and setting-up for the Kylie Cosmetics collaboration with Balmain. She was in Paris without Kylie though, because Kylie was sick and couldn’t make it on the plane. Kris had her see their family doctor in hopes that she would be well enough to come to Paris, but ultimately she was too sick to make the trip.

Kris had to press on without Kylie, but she was nervous about Olivier Rousteing’s feelings about Kylie not being there. Kris offered to ask Kendall to walk in the show, but Kendall turned her down because she had work obligations.

What they didn’t show you was Kris begging Olivier to let her walk in the show and he almost cancelled the whole collaboration because of her audacity. He said he’d rather lose millions than send Kris down his runway. – NW

Back in LA, Kim was going through Khloe’s closet telling her everything she hated. Khloe brought up Tristan. Khloe expressed that while it was nice of Kim to invite Tristan to dinner, they don’t need to be hanging out with Tristan for no reason. It hadn’t been a year yet since they broke up, so it’s a lot so soon. Kim said she gets it and she’ll try to do better.

Being in Khloe’s closet is like being in a Goodwill store. – NW

Later at Khloe’s house, Khloe confronted Kourtney about how she’s being rude when Kourtney thinks she’s just joking. Kim added that her communication is super negative and bad vibes. Kourtney felt like her attitude back to them is a reflection of their attitude towards her. Kourtney told them that they just don’t like change, but Kim and Khloe said that wasn’t true. It’s just that Kourtney has a bad attitude and she’s become a different person and not in the best way. Khloe wanted resolution but it seemed like Kourtney did not.

Because of her nasty attitude, I avoid auntie Kourt at all times. She has an attitude like it’s my fault her Tumblr page, POOSH, hasn’t taken off. – NW

Later, Kim met up with Jonathan at a sushi restaurant. Kim told Jonathan that Kylie has strep throat so she couldn’t go to Paris for her collaboration with Balmain. Kris had been calling Kim crying and asking her to take Kylie’s place because she’s in panic mode. Kim declined because she spent a lot of time separating her brand, KKW Beauty, from Kylie Cosmetics. Kim felt bad because Kris was begging and even bribed her with money and a jet to get her to go, but it wouldn’t make sense for her.

It’s all about the brand. We worked so hard on making KKW Beauty the more sophisticated and less successful version of Kylie Cosmetics. It didn’t make good business sense to attach ourselves to the Balmain collaboration. It would’ve just confused our consumers.

Later, at Khloe’s house Kim, Kourtney, Khloe and Kendall talked about how Kris was desperate for someone to come to Paris to take Kylie’s place. Kim said that Kris was freaked out because she’s used to her and Khloe working no matter what, unlike Kendall and Kourtney. Kendall lashed out at Kim over her comments. Kendall said that she’s been sick and has had panic attacks and she works her butt off whether she’s sick or not. Kim reiterated that her and Khloe are the ones that will work no matter what and that Kourtney just doesn’t care.

This caused Kourtney to lash out at Kim. Kourtney said that she would eff Kim up if she brought it up again. Kim started to laugh in her face, only upsetting Kourtney more. Kourtney didn’t want to hear about work ethic as if Kim was better than her because she worked more. She told Kim that if she didn’t want to work hard and wanted to be a stay at home mom that would be fine. As she finished her statement, she threw her water at Kim and rushed her while Kim was on the ground.

Kim told her not to ever come at her like that again and that she would punch her in her face. Kourtney dared her to do it, and the girls got physical. Kim and Kourtney began to punch, kick, slap and scratch each other. Kim slapped Kourtney in her face multiple times. Khloe tried to break the girls up with no success. Kendall just stared in amazement. The episode ended on a «To Be Continued,» right after we saw Kim chasing Kourtney down the hall for one more slap in the face.

Penelope’s assault on her nanny makes so much sense now, her mother is a savage. This is a direct result of their gluten-free diet. Putting your hands on someone is never okay. Most jobs you would get fired for this type of unruly, violent behavior. However, this fight is good for ratings so I put a bonus in Auntie Kourt’s check this month.

I am working with law enforcement in an effort to press charges against Auntie Kourt for attacking mommy. I have given them a copy of this episode to be used as evidence. They will clearly see that mommy acted in pure self-defense, she’s the victim. We would sue, but Auntie Kourt doesn’t have anything. Not worth my time. – NW

«Keeping Up with the Kardashians» airs Thursdays on E!