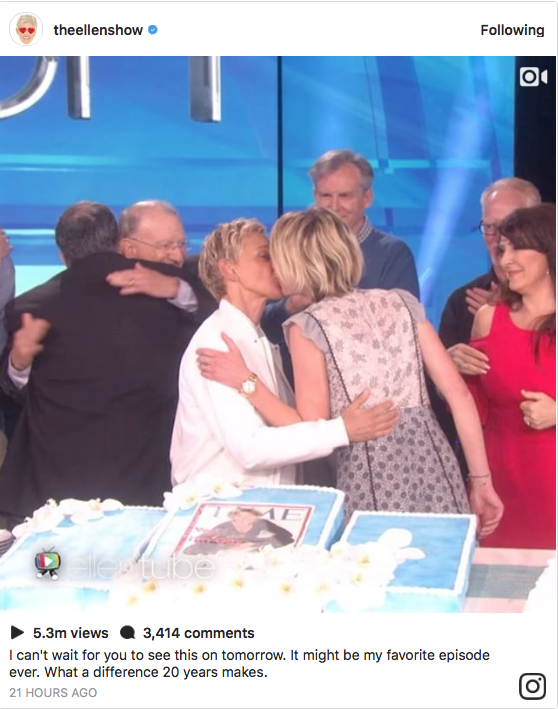 On Friday’s episode of The Ellen DeGeneres Show, the 59-year-old comedian celebrated the 20th anniversary of «The Puppy» episode of her ’90s sitcom, where her character came out as a lesbian. To mark the occasion, DeGeneres invited the cast of the series onto her talk show, along with Oprah Winfrey and Laura Dern, who both guest starred in the episode, and her wife, Portia de Rossi.

«My character, Ellen Morgan, came out as a lesbian, and I, Ellen DeGeneres, came out at the same time,» she announced on her talk show. «It was the first time a lead character had come out.»

DeGeneres said she picked Winfrey to play the role of her therapist to «legitimize» the episode. The Queen of Talk said she didn’t even think of how being a part of the episode would impact her life. «I just said ‘yes,’ because I so believed in your truth,» she told DeGeneres. «And I wanted to support you.»

«You wouldn’t have been able to open people’s hearts and touch hearts and minds and make a difference in the world had you not had the courage to do that,» Winfrey added. Dern recalled playing DeGeneres’ love interest on the show, and what a «privilege and an honor» it was to take on the role. DeGeneres noted that the actress didn’t work for a year due to the backlash that came after the episode aired, but Dern has no regrets.

«There’s no greater gift than being the person that was with you and looking in your eyes as you said those words,» she said. «I remember us literally holding each other up through this emotional moment. It was so profound and I feel so blessed that I got to be there and witness that.»