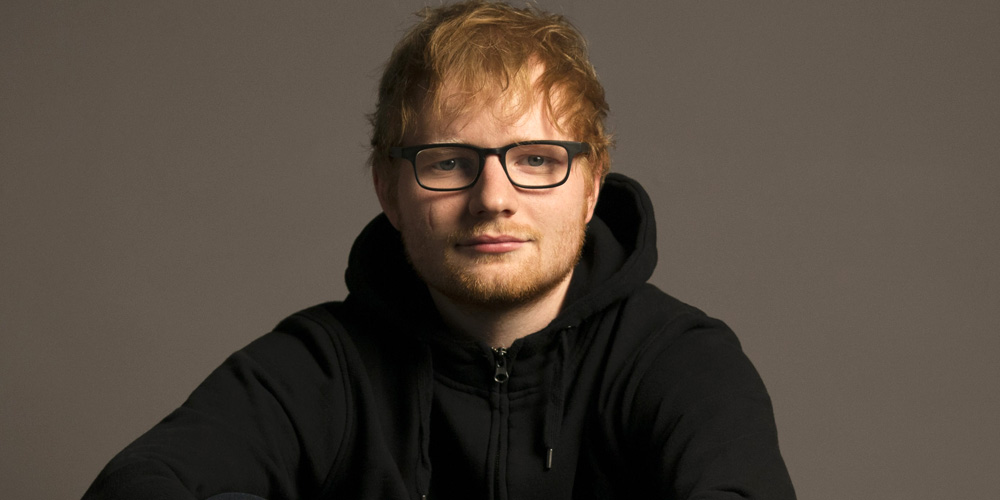 Puppet Ed Sheeran is back! But unlike the last time we saw this version of the ginger-haired crooner in 2014’s party-filled and troublemaking video for «Sing,» this time, he’s experiencing some serious heartbreak.

As Sheeran sings in the opening of «Happier,» his puppet walks down 29th and Park Avenue only to spot his ex — a balloon girl, naturally — enjoying a laugh-filled meal with another puppet. After flashing back to when that was him and her, Sheeran makes his way to a bar to drink away his pain with some whiskey, later playing the song on a sidewalk with a sign that reads «Heartbroken and unhappier.»

Haunted by his ex’s memory as everything around him turns into balloons, Sheeran once again returns to the fateful corner of 29th and Park only to see her again. But now she’s the one experiencing the heartbreak as her new puppet beau lets her go, and Sheeran has to watch his love float away — literally.

Sheeran’s previous video for the ÷ track «Perfect» recently hit 1 billion views on YouTube, which he celebrated on Instagram just before dropping the «Happier» video. It’s unclear when we’ll see puppet Sheeran next, but hopefully his story is a little «happier» next time.

Watch the «Happier» video below.

Ed Sheeran is reportedly planning to take his upcoming wedding to the next level.

According to Belfast Telegraph, the “Shape Of You” singer wants to build his own chapel on his estate in Suffolk, England and has already submitted a planning application to the District Council.

The publication mentions details of Sheeran’s application, stating that he explained his reasoning behind the chapel as, “It is every person’s right to be able to have a place to retreat for contemplation and prayer, for religious observance, celebration of key life and family milestones, marriages, christenings and so forth.”

The pop star and fiancée Cherry Seaborn announced their engagement in January, after keeping the news under wraps for a few weeks to enjoy the moment. Rumors recently sparked that the couple secretly tied the knot after Sheeran was seen wearing a silver ring on his left hand. At the BRIT Awards, he clarified that it was an engagement ring and that the wedding plans are not officially decided upon yet.

Got myself a fiancé just before new year. We are very happy and in love, and our cats are chuffed as well xx

While Taylor Swift’s Reputation is a mega-seller, none of the singles have made a lasting impression on pop culture. She’s hoping to change that with “End Game,” an all-star collaboration with Ed Sheeran and Future. The track is already top 10 at pop radio and could breathe a little life into the topsy-turvy era. “I wanted to let you know first, the ‘End Game’ video comes out tomorrow,” the 28-year-old told fans on her app. “Gonna be posting a few pictures on here before the trailer premieres on GMA tomorrow.”

Of course, we already know that Joseph Kahn directed the video and that some of it takes place on a yacht in Miami. However, the biggest talking point is the possibility of a Katy Perry cameo. A woman resembling the pixie-haired pop star was snapped on set, sparking rumors of a potential burying of the hatchet. It’s a bit on the nose, but stranger things have happened in the name of YouTube views. See Taylor’s message below and make sure to tune into GMA tomorrow for the first official preview of “End Game.”

Ed Sheeran’s “Perfect” just got another reboot, this time as a classical crossover tune with a guest turn from celebrated Italian tenor Andrea Bocelli.

Sheeran hinted at the latest evolution of “Perfect” with an Instagram earlier this week. «Orchestral version of ‘Perfect’ with the amazing Andrea Bocelli comes out Friday. Orchestrated and produced by my super talented brother Matt, little gift for you all before Christmas,» the U.K. pop star captioned. Sheeran sings some lines in Italian on the new track, which is billed as “Perfect Symphony” by Ed Sheeran and Andrea Bocelli and arrived at midnight.

“Perfect” currently sits at No. 1 on the singles charts in the U.S., U.K. and Australia after Sheeran reworked the Divide song into a duet with Beyonce. Now with Bocelli on board — a legend in his field with more than 80 million album sales and eight career top 10 titles on the Billboard 200 — “Perfect Symphony” should challenge for the U.K.’s coveted Christmas No. 1 spot.

Listen to the new release below.

Eminem pulled out all the stops for the release of his ninth studio album, Revival. The legendary rapper kicked off the campaign with a surprise Beyonce feature on its lead single, “Walk On Water,” but she is only one of several superstar features. Out today (December 15), the LP features collaborations with the likes of Pink, Alicia Keys and Ed Sheeran. Of them all, his work with the “Perfect” crooner is easily the most striking.

The unexpected duo team up on “River,” and the harrowing release charts a catastrophic relationship that causes nothing but pain. Produced by Ed and Emile Haynie, the UK crooner referred to the collab as the “highlight of my career” in a recent interview with The Times. It is also one of his most sorrowful, as Eminem details a one night stand tainted by revenge and heartbreak.

“And I know she’s using me to try to play him, I don’t care,” the “Lose Yourself” rapper declares. However, the pair’s choices result in an unplanned pregnancy and some difficult decisions for everyone involved. Ed opens and closes the track with a chorus, which highlights the pain caused by their mistakes. “I’ve been a liar, been a thief. Been a lover, been a cheat. All my sins need holy water. Feel it washing over me. A little one, I don’t want to admit to something if all it’s gonna cause is pain,” he mournfully sings over a sparse production.

It remains to see if the pair will select the track as an official single. As evocative as it is, “River” feels a little too raw for radio. Eminem may be more likely to push for one of the more obvious songs on the project. However, neither he nor Ed will be hurting for a hit. In fact, this is only one of three collaborations the 26-year-old unveiled tonight.

He also united with N.E.R.D. for “Lifting You” and teamed up with Andrea Bocellifor a third version of his current chart-topper “Perfect.” Any of the above could become hits, but give his emotional release a spin below.

They did it! Ed Sheeran and Beyonce knock Post Malone’s “Rockstar”from the top spot on the Billboard Hot 100. Their “Perfect Duet” becomes the Brit’s second number one and Queen Bey’s tenth. The superstar now has six chart-toppers as a solo artist as well as the four she notched up during her stint with Destiny’s Child. Beyonce is now the 11th act to nab 10 number one hits — the others being The Beatles, Elvis Presley, Mariah Carey, Rihanna, Michael Jackson, The Supremes/Diana Ross, Madonna, Whitney Houston, Stevie Wonder and Janet Jackson.

According to Billboard, the stripped-back ballad sold 181,000 downloads in its first full tracking week. That’s an increase of 202 percent. The duet version accounted for 63 percent of the song’s total sales, which more that justifies Beyonce’s addition as a co-lead artist. “Feels mad to say this, but I’ve had my second ever number one single in America, one at the start at the year, one at the end,” Ed wrote on Instagram. “What a year it’s been. Thanks to Beyonce for giving this new version a revamp, and thanks to everyone who’s supporting it.”

Ed Sheeran and Beyonce’s appropriately-titled “Perfect Duet” is headed for number one on the Billboard Hot 100. “In the tracking week ending tonight, Dec. 7, the song should sell 160,000 or more downloads, according to preliminary data,” writes Billboard chart analyst Gary Trust. “Such a sum could be enough to propel ‘Perfect’ past [Post Malone’s] ‘Rockstar’ and crown the Hot 100.” He also confirms that Queen Bey will be credited given that the duet version “could account for two-thirds of the song’s sales in the week.”

That’s good news for members of The Hive, Beyonce’s fiercely loyal fanbase, who have been waiting nine, long years for another number one. Of course, she last topped the chart in 2008 with seminal hit “Single Ladies (Put A Ring On It).” If “Perfect” reaches the summit, it will become the superstar’s 6th number one as a solo artist and 10th overall. (She also nabbed four with Destiny’s Child). Given the top three success of the “Mi Gente” remix and number 14 debut of Eminem collaboration, “Walk On Water,” it’s been quite a year for Bey given that she is technically off-cycle. 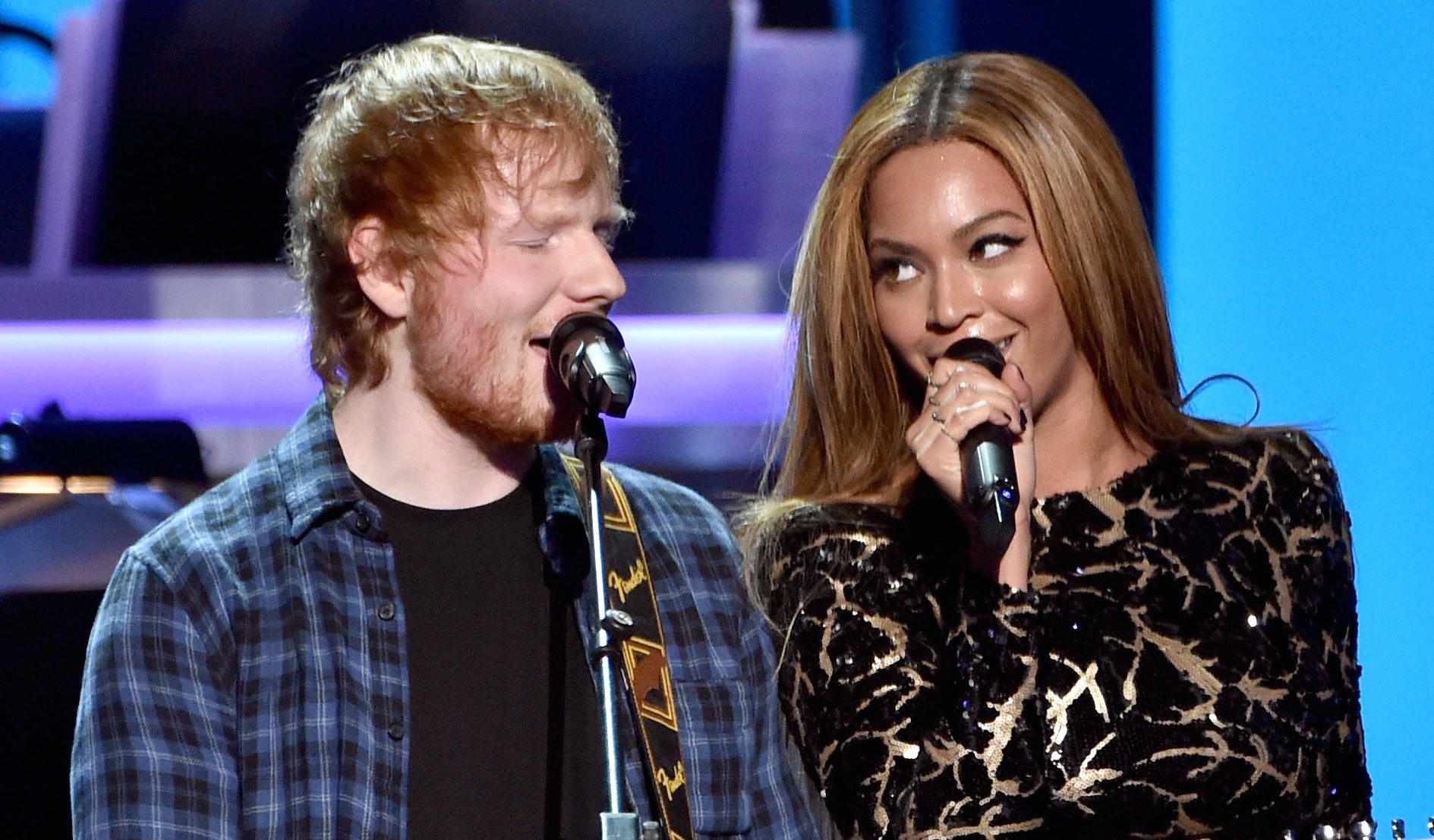 Ed Sheeran shared a new acoustic version of his ÷ single «Perfect» featuring Beyonce on Thursday evening (Nov. 30) that lives up to its name.

The superstars share the spotlight on the duet, with Sheeran opening up the song by singing the first verse and chorus over light acoustic guitar picking and organ backing. Beyonce comes in on the second verse, swapping the lyrics’ genders with support of choral background vocals, and then is joined by Sheeran partway through the second chorus.

There’s a divine intimacy in the moving reworking, which is naturally amped up by Beyonce’s superstar feature but balanced out by the stripped back accompaniment.

This is Beyonce’s third surprise feature of the fall, following «Mi Gente» with J Balvin and Willy William, as well as Eminem’s «Walk On Water.»

When Ed Sheeran mentioned that he would be «Despacito»-ing his track «Perfect,»  he really should have replaced it with «Mi Gente»-ing. Early Thursday (Nov. 30) Sheeran confirmed that the secret star he collaborated on the remix of that particular ÷ track is none other than Beyoncé.

Got Beyoncé to duet with me on Perfect, comes out today at 7pm ET / 4pm PT / midnight GMT x

Sheeran began teasing the track last week, referring to it as a «f—ing big deal.»  Beyoncé’s duet with Sheeran will move her collaboration-count up to three in 2017, following «Mi Gente» with J Balvin and Willy William, as well as Eminem’s «Walk On Water.»

«Perfect» ft. Beyoncé is scheduled to be released tonight at 7 p.m. ET. Prep yourself and give the original track another spin, below.

It doesn’t appear that Ed Sheeran will be playing the guitar any time soon.

On Monday, the 26-year-old musician shared a photo of his right arm in a cast and a sling on his left arm after he says he suffered some injuries while riding his bike.

«I’ve had a bit of a bicycle accident and I’m currently waiting on some medical advice, which may affect some of my upcoming shows,» he revealed in the caption. «Please stay tuned for further news.»

Ive had a bit of a bicycle accident and I’m currently waiting on some medical advice, which may affect some of my upcoming shows. Please stay tuned for further news. Ed x

News that Sheeran may have to postpone some of his concerts comes almost exactly a month after he canceled his performance in St. Louis, Missouri, due to protests in the city at the time.

This wouldn’t be the first time the «Thinking Out Loud» singer has spoken out about an injury. Earlier this year, he addressed reports that Princess Beatrice had accidentally cut him with a sword at a costume party. The mishap reportedly occurred during a mock knighting of James Blunt at the Royal Lodge in Windsor, the home of the royal’s father, Prince Andrew.

«There weren’t a lot of people there that night,” he admitted. “For two weeks after, I had a huge gash on my face and would tell people I fell and then suddenly, the story came out.”