Maroon 5’s sixth LP, Red Pill Blues, is shaping up to be the band’s most eclectic offering to date. There’s a little pure-pop courtesy of rising hit “What Lovers Do,” a little mid-tempo introspection via the Julia Michaels-assisted “Help Me Out” and a moment of quiet reflection on “Whiskey.” The band’s latest buzz track finds Adam Levine and A$AP Rocky reflecting on the one that got away. “Would’ve left this world behind, just to wake up by your side every mornin’,” the frontman croons. “I would’ve sold my soul for a little more time.”

Rocky is similarly bummed. “I ain’t like the other Cognacs or type of cat that’d never call back,” he raps. “Or lose contact when you runnin’ out of rum and you make a run.” They share their misery on the chorus. “I told her she could have my jacket, wrapped it tight around her shoulders,” the guys remember. “And I was so young ’til she kissed me, like a whiskey, like a whiskey.” Red Pill Blues drops November 3. Listen to the latest buzz track below. 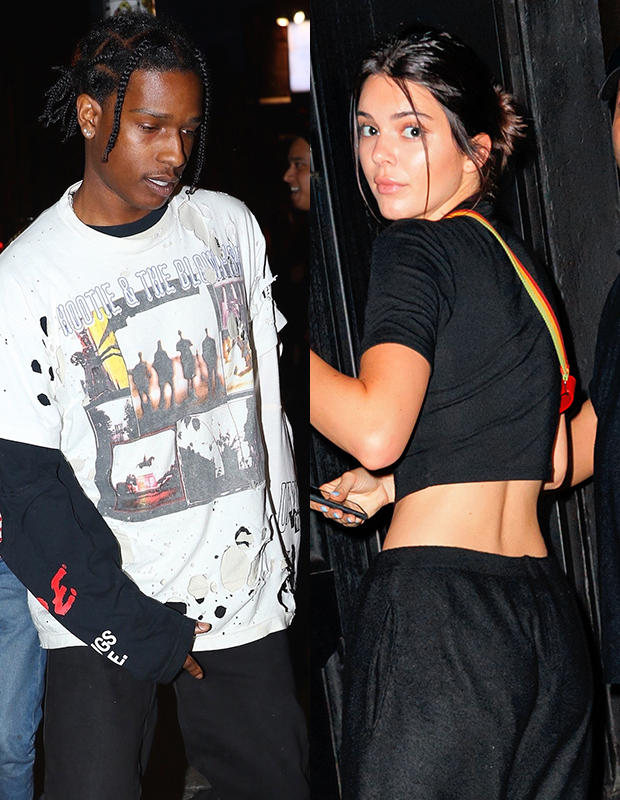 Kendall Jenner and A$AP Rocky are taking over NYC! The couple had a fun date night out at Tyler, the Creator’s surprise concert. Kendall and A$AP tried to be inconspicuous, but no one could ignore these two hot celebs out and about!

Kendall Jenner, 21, and A$AP Rocky, 28, flaunted their couple status in New York City on Aug. 3. The private couple stepped out for Tyler, the Creator’s secret show! Kendall looked hot, as always, in a black crop top that showed off her toned abs, along with baggy pants. A$AP kept his look casual in a Hootie & the Blowfish t-shirt and black pants. The couple didn’t show off any PDA while walking into the concert, but this is the first time they’ve been seen together publicly since June 29!

A$AP was one of Tyler, the Creator’s special guests at his surprise show for Converse and Foot Locker in New York City at Webster Hall. Frank Ocean, 29, was there and performed with Tyler. A$AP couldn’t resist bringing Kendall along for some fun in the Big Apple! Most of the time, the couple keeps their relationship on the down low. Kendall and A$AP are both constantly busy with her modeling career and his music, but they do stay in touch constantly. HollywoodLife.com learned EXCLUSIVELY that Kendall is “always calling him and messaging him if either of them is away somewhere.”

Kendall and A$AP have yet to make their red carpet debut as a couple, but they can’t resist public date nights. But these two have no intention of thrusting their romance into the spotlight for publicity. HollywoodLife.com also found out EXCLUSIVELY from a source that Kendall loves that A$AP is totally OK with them keeping their relationship between them so “special and private.”

Kendall Jenner is forging her own path in a family that is hungry for fame and limelight. She is often more discreet than her siblings, but occasionally she grabs headlines in a big way.

The 21-year-old model’s career has been a decent success minus the enormous controversy over her Pepsi ad. Lately, there is an increase in attention regarding her dating life.

The media is fascinated by her romance with 28-year-old rapper ASAP Rocky. Is it serious? Are they getting engaged?

So many questions and so little clues, but fans want clear answers. This week, the rumored couple was seen in New York City with matching diamond rings. The two talents made no effort to hide them.

Those pictures have sparked a round of rumors about an engagement. A friend of the twosome recently said that they are extremely close and very much in love.

The insider revealed: “Kendall [Jenner] and [A$AP] Rocky are totally still on, they just have crazy busy schedules, so they are not physically together right now.”

The person added: “Kendall is in New York, while Rocky is tied up with promoting his new album and getting ready for festival season. It suits them not living in each other’s pockets though, Kendall would hate to be in some claustrophobic relationship, she needs her freedom, and Rocky is totally on the same page.”

How do those charming youngsters make the relationship work? Well, like most busy people, they rely on technology a lot.

Our chatty source concluded: “When they are not together they talk every day and try to FaceTime as much as possible, but they are both confident and secure enough in themselves, and their relationship, not to have to be in constant contact. It is a true love match between Kendall and Rocky.”