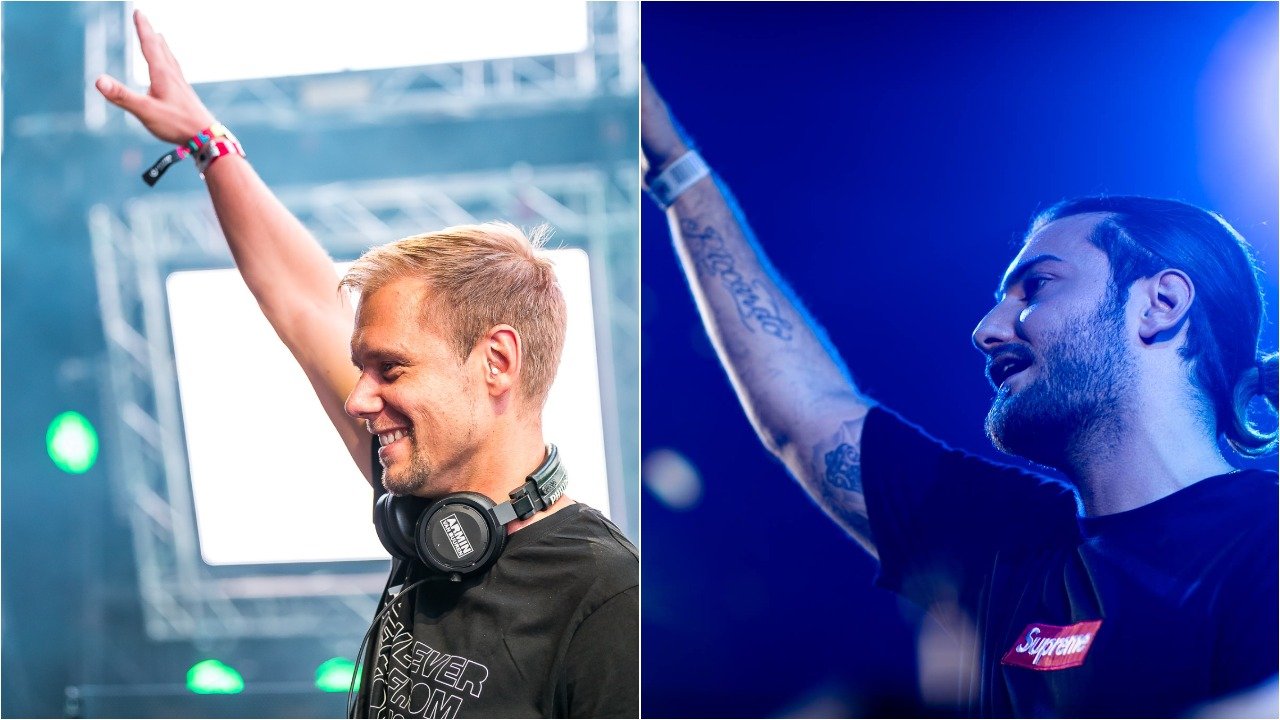 As a special Valentine’s Day treat, Alesso and Armin van Buuren have teased a new collaboration, “Leave A Little Love.”

Surprisingly, as far as we can tell, this will be the first time the two have ever worked on a track together, original, remix, or otherwise. Despite both of them being such massive stars, either their styles never matched or the opportunity just never came up… until now.

Stay tuned to find out when this one is going to drop!

No reason to freak out here, but Liam Payne confirmed on Monday night (April 13) that you’re not the only ones thinking about One Direction‘s upcoming 10th anniversary. Late Late Show host and friend of 1D James Corden reminded Payne that July marks the boy band’s tin anniversary, so he wondered if they had anything in store for fans who are cooped up in so many ways these days.

«Are there plans afoot for you guys to do anything to celebrate this milestone,» Corden asked from inside the makeshift studio in his Los Angeles garage. «I’m not allowed to say too much obviously, because I’d be giving it away. But we’ve been speaking a lot more at the moment,» Payne said from his lush London apartment.

In case you missed it, that was not a no. In fact, it was very close to a yes.

«I think that we’re all feeling that that 10 year is a very special moment,» Payne said, noting that at 26 he’s a decade into his music career already. He said he had a «beautiful» FaceTime with Niall Horan recently, who he hadn’t spoken to in a long time, adding that he’s also chatted with Louis Tomlinson. «Yeah, it’s been really nice, it’s a nice moment.»

Payne and Alesso then performed their new single, «Midnight,» on TV for the first time, with Alesso rocking out on samplers and drum pads in the disco-lit backyard of his L.A. home and Payne giving a tour of his very nice-looking London pad as he was filmed by a drone hovering just inches from his face.

Watch the interview and performance below.

From L.A. to London.

The coronavirus has halted many plans in the music industry, from tour cancellations to album pushbacks, but it didn’t stop Grammy-nominated DJ-producer Alesso and former One Direction singer Liam Payne from filming a new music video. The pair joined forces for the new dance song “Midnight” but couldn’t film a typical music video because of social distancing, quarantining and being homebound due to the spreading virus.

So Alesso went into the Los Angeles studio where he originally created the track to film his portion while Payne, who lives in London, had a friend film him singing on his balcony.

The result is a clean, simple clip that could pass for a video that was not made with limitations. “Midnight” was released Wednesday(April 8). “It was nice just to make a video with a lot less noise around it — music videos are always so busy,” Payne said in a phone interview with The Associated Press this week. “For me personally, just to be able to go outside my house, perform a song on the balcony and just sing it the way I wanted to perform it rather than have people telling me how to move or what to do, or anything like that. It was very much our video and I’m proud of that.”

“It’s kind of refreshing to just see Liam perform and me just working on the song,” Alesso added. “That’s really how we do it, you know? And kind of let the song have the shine. For me, it was refreshing.”

“Midnight” is relationship song about coming together. But the performers said with the impact the coronavirus has had around the world, the song has taken on a special meaning. “It definitely gives it a bigger meaning. We’re always going to listen to this song, at least me and Liam, and think about these times,” Alesso said. “I think it definitely gives it a special feeling to it.”

“We’re all learning new things about our spouses and spending so much time together with them, people overcoming such massive things in the world together. I think that definitely lends a hand toward the song as well and how you overcome these sorts of things,” Payne added. “Midnight” is one of many songs the 26-year-old Payne has released since One Direction went on hiatus in 2015. He dropped his debut album LP1 in December and hit the Top 10 of the Billboard Hot 100 chart with multi-platinum hit, “Strip It Down.” The English singer has also collaborated with J Balvin, Zedd, French Montana, A Boogie wit da Hoodie and Rita Ora.

Alesso, who is Swedish, has cracked the Top 40 with the platinum hits “Heroes (We Could Be),” featuring Tove Lo, and “Let Me Go,” with Hailee Steinfeld, Florida Georgia Line and Watt. The 28-year-old has also had success as a remixer, even earning a Grammy nomination for his house version of OneRepublic’s “If I Lose Myself.”

Alesso had been looking for a singer to perform on “Midnight” and was happy Payne jumped onboard: “He added his incredible flavor to it. It really turned out incredible.” The artists say while at home, they’re continuing to be creative. Alesso is working tirelessly in the same studio where he produced “Midnight” and filmed the song’s video. “I work like 10 times more now because I have more free time. My creativity really flows better now because I’m just home and I’m not distracted by touring and that kind of stuff,” said Alesso, who added: “I also, of course, sit and play a lot of video games and watch a lot of Netflix.”

Payne says he’s been busy “drawing, sketching artwork, painting stuff.” He’s also been giving back to his community by donating 360,000 meals to food banks in need during the pandemic through the charity The Trussell Trust. He hopes “Midnight” — the song and video — can have a positive impact on people. “It’s important at this time to step out there for our fans. While everyone’s stuck at home and self-isolating, I just think it’s important to still have stuff coming through to bring a little bit of sunshine to everybody’s day,” Payne said.

Amid pumping out jokes on the internet, Swedish star Alesso has announced a forthcoming collaboration with Liam Payne. In a video posted on Payne and Alesso’s social channels Wednesday (April 1), the guys reveal that the track, called «Midnight,» is a soaring anthem built on Alesso’s grand-scale production and Payne’s plaintive vocals, which proclaim «I just want to lay here, fall into midnight.» The song is out on Wednesday, April 8.

Alesso first teased «Midnight» on March 26, saying he had the track ready but needed a vocalist. Now that he’s found one in Payne, the two artists are also inviting fans to get involved in the official remix. Once the track is released, aspiring producers can do their own edit of «Midnight» and submit the track for consideration by using the hashtag «#AlessoMidnight.»

«Midnight» is the duo’s second collaboration, following their 2016 single «Next to Me.» After bursting onto the US music scene with a star-making feature on Iggy Azalea’s (very underrated) “Switch,”Anitta has built a loyal following with mega-bops “Paradinha” and “Sua Cara” as well as a soulful appearance on Poo Bear’s “Will I See You.” The Brazilian goddess is destined to find an even bigger audience with “Is That For Me,” a collaboration with Swedish DJ Alesso. The track comes from the 24-year-old’s Check Mate project and boasts an elaborate video filmed in the Amazon jungle.

“No words to describe the energy of this place,” Anitta captioned a still from the video on Instagram. “I hope everybody can feel it with our new video.” If the teasers are any indication, this is going to be a blockbuster. There’s a pic of the hitmaker rocking a leopardskin-print bodysuit on a boat and another of her posing in a pond. The most intriguing finds her standing next to Alesso with a grass skirt and silver-coated breasts. YouTube is about to break from all the views! See the pics below.