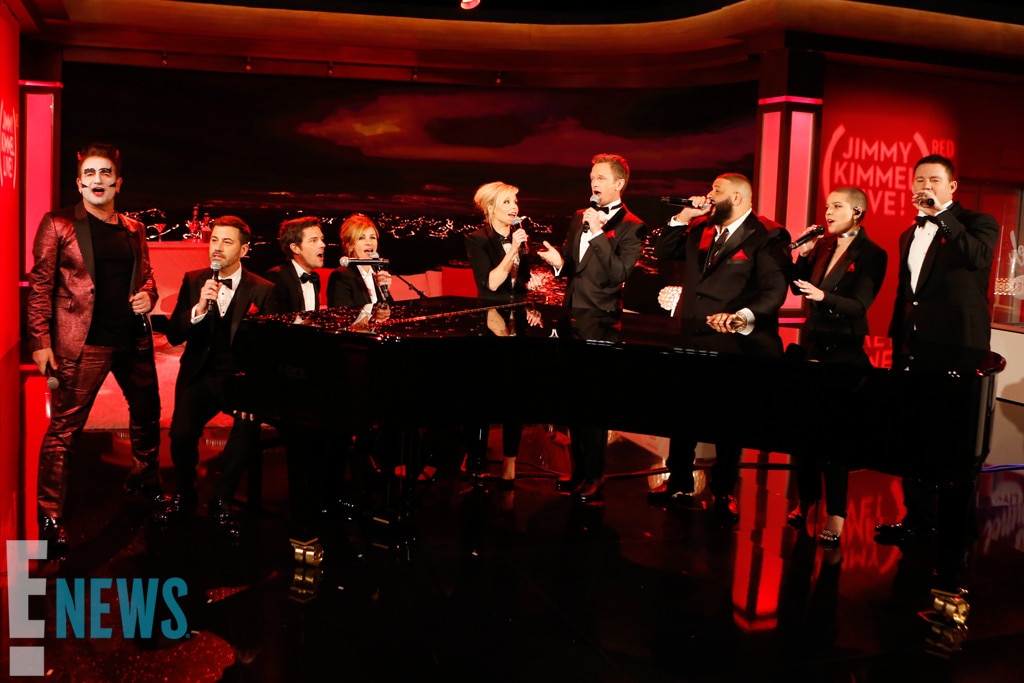 What’s a serenade without a few stars?

Jimmy Kimmel‘s audience got some unforgettable entertainment Thursday night from Hollywood’s finest, including Channing Tatum, Julia Roberts, Bono, and Neil Patrick Harris, who were gathered around the piano during the host’s recurring (RED) episode to raise awareness and money for AIDS.

While sipping on martinis and clad in coordinating tuxedos, the celebrities took turns belting out lyrics about how they may be rich, but if they don’t help people with AIDS, they’re going to hell.

«We’ve got Ferraris and a weekend home in Carmel, but if we don’t help people with AIDS, we’re going to hell,» they sang in unison before Roberts’ requested a tap dance from Harris and Tatum.

Despite their impressive routine, the men danced on a carpet and ruined the sound effect. Like the late night host pointed out, they can always add the tap sound in later.

Turns out—Kimmel is responsible for writing the «going to hell» line, while The Killers‘ frontman Brandon Flowers penned the rest of the tune. «If you don’t help people with AIDS, you are going to hell, and that seems like a good enough reason to help alone,» Bono said. «I mean, just think of yourselves.»

In an effort to raise funds for the worthy cause, the celebrities have banded together to offer one-of-a-kind experiences in an auction. Among the items and experiences up for grabs is tea with Bono and Roberts or a Broadway show with Harris.

If you’re more interested in getting behind the scenes, you can do just that at the sold-out Hamilton, where Javier Muñoz is available to hang out backstage. But, if you’re looking to get away from the cold, DJ Khaled wants to go jet skiing.

Don’t wait too long to donate! Remember, if you don’t help people with AIDS, you’re going to…