Sean Paul and Sia have reunited for a new club anthem Dynamite, which was released today.

Produced by Banx & Ranx and Greg Kurstin (Adele, Pink, The Foo Fighters), Dynamite features a bass heavy electronic production with Sia’s signature vocals, while Sean keeps it Dancehall with his commanding lyrics. “Dynamite” is for the dynamic duos, the power couples, and those who stand by the phrase, “Teamwork makes the dream work“.

The track is a follow-up to the genre-bending artists’ smash hit “Cheap Thrills,” also produced by Greg Kurstin, which has racked up over 1.6 billion YouTube views since its 2016 release.  The song reaped multi-platinum success, peaking at No. 1 on the US Hot 100 Billboard Charts and was also featured in the recently released Marvel film, “Black Widow”.

“’Dynamite’ started out as just a good vibe song. After recording ‘Cheap Thrills’ Sia and I knew we would record another single and ‘Dynamite’ is the second installment,” Sean Paul said. 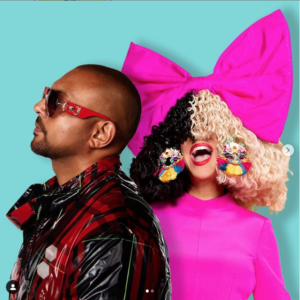 “Banx and Ranx, Greg Kurstin, myself and Sia, worked on this single and I hope people gravitate towards it like our first single. ‘Dynamite’ is another feel good record for me and I just want to thank Sia and her entire team, my team Duttyrock, my management team and big up my mom who introducedme to Sia’s music,” he added.