The pop superstar will present her first fashion collection for the French luxury giant later this month in Paris. 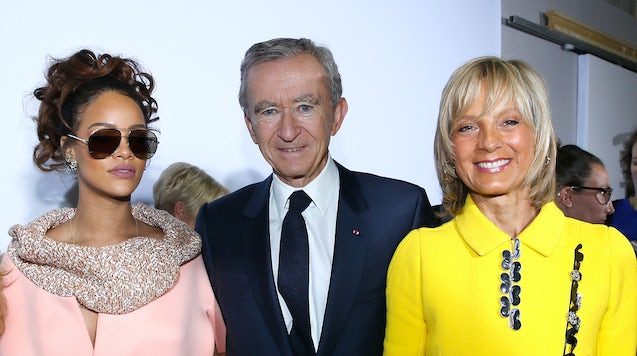 PARIS, France — After months of hype, LVMH and Rihanna’s fashion venture is finally materialising. The superstar, whose full name is Robyn Rihanna Fenty, is set to present her first collection for the new label, which will be branded Fenty, later this month in Paris. The offering will span ready-to-wear and accessories, including shoes, sunglasses and jewellery.

“Designing a line like this with LVMH is an incredibly special moment for us. Mr Arnault has given me a unique opportunity to develop a fashion house in the luxury sector, with no artistic limits,» said Rihanna, in a statement, referring to LVMH Chairman and Chief Executive Bernard Arnault. «I couldn’t imagine a better partner both creatively and business-wise, and I’m ready for the world to see what we have built together.»Rihanna’s Fenty Beauty line, launched in partnership with LVMH beauty incubator Kendo, generated €500 million in its first full year in operation, underscoring the power of the Barbadian singer.

“Everybody knows Rihanna as a wonderful singer, but through our partnership at Fenty Beauty, I discovered a true entrepreneur, a real CEO and a terrific leader. She naturally finds her full place within LVMH,» said Arnault. «To support Rihanna to start up the Fenty Maison, we have built a talented and multicultural team supported by the group resources. I am proud that LVMH is leading this venture and wish it will be a great success.»

As first reported by BoF, Rihanna is a 49.99 percent shareholder in Project Loud France, the official name of the company that owns the new label, via her company Denim UK Holdings. (Her attorney Ed Shapiro and Jay Brown, chief executive of her music label Roc Nation, are the directors of Denim UK Holdings.) Rihanna has committed nearly €30 million of “in-kind” contributions to the venture — meaning she’s offering up €30 million worth of her time, her name and what she represents — while LVMH has put up €30 million in cash.

Fenty’s head office is located in the building occupied by the LVMH Fashion Group, which is comprised of the conglomerate’s smaller fashion labels, including Celine, Givenchy and Loewe, and led by Sidney Toledano.However, the label will be supported by LVMH veterans including longtime Louis Vuitton executive Véronique Gebel, who will report to Project Loud’s President and LVMH’s Chief Strategy Officer Jean-Baptiste Voisin.While Fenty may be a departure from LVMH’s typical playbook, which is rooted in reviving heritage brands, Rihanna’s track record with the company is a clear indicator that her global influence, driven, in part, by her message of diversity and inclusion, may be worth doubling down on.

With more than 70 million followers on Instagram, the entertainer has managed to rewrite at least some of the rules of the beauty industry by making 40 shades of foundation the minimum requirement. She has also shifted the conversation in lingerie with the launch of Savage x Fenty, a size-inclusive line produced in partnership with El Segundo, Calif.-based TechStyle Fashion Group, the company behind Kate Hudson’s Fabletics activewear label. (Her collection with Puma, at the time owned by rival luxury group Kering, ended in the Spring of 2018.)

“[LVMH] has one of the best platforms in the world in terms of design, marketing, distribution, supply chain,” luxury analyst Mario Ortelli told BoF in February. “That’s why they’ll make the bet. Whether it succeeds will depend on execution.”