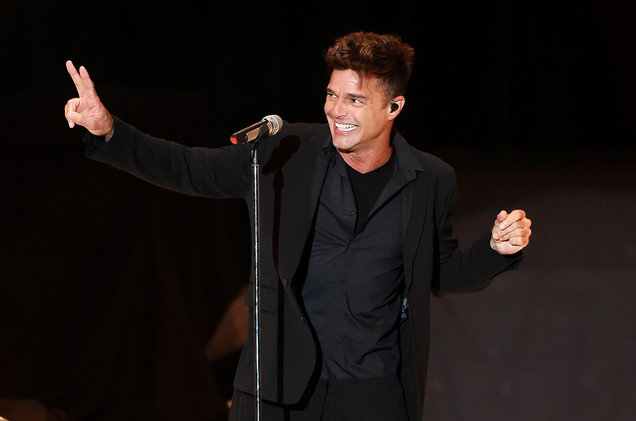 «I do believe that Hillary Clinton will be the next president of the United States,» said Latin superstar Ricky Martin at the presidential hopeful’s «She’s With Us» concert last night (June 6) at L.A.’s Greek Theatre.

The «Livin’ La Vida Loca» singer was one of the many musical acts who showed up to Clinton’s fundraising concert ahead of the California primaries. To kick off the star-studded event, singer Andra Day took the stage to give a powerful performance of her song «Rise Up,» which she dedicated to Clinton for her resilience.

Following Day’s showcase, Jamie Foxx appeared before the crowd to say a few words about Mrs. Clinton and her encounter with his two daughters. «My daughters are right here and they are excited to get to meet a person who is strong, capable and who just happens to be a woman … Ladies, don’t let anyone steal this moment away from them and get Hillary Clinton in the White House.»

Legend, who gave a forceful performance of hit singles like «Green Light,» «All of Me,» and his Oscar-winning track «Glory,» also gave a few remarks on the 2016 presidential election. «Boy am I proud to be a Democrat right now,» he said. «It was great to see our candidates not arguing over who could build more walls, who could divide or deport more people, whose hands were bigger … Hillary and Bernie Sanders were competing over who could best deliver on the issues that matter most to ordinary people.»

Before Ricky Martin hit the stage, his good friend Eva Longoria said a few words on Clinton and why she, as a Latina, will vote for the former Secretary of State. «I stand with Hillary because I’m a Latina. We care deeply about policies that disproportionately affect our community and one of those issues is immigration reform. We are tired of being synonymous with illegal, synonymous with not from here. We’re part of the thread that makes the United States of America,» said the actress and producer before presenting Martin, who got the crowd on their feet singing «Shake Your Bon-Bon,» «La Bomba,» and «Cup of Life.»

The iconic Cher then appeared onstage to explain why she is voting for Hillary Clinton. «When I see Trump talking, I just want to blow my brains out, well maybe not my brains but I’m just like ‘What are you talking about, Jesus!’ I know that Hillary fights for equality for all people and we are no good unless all of us are equal.»

Continuing the women power, Christina Aguilera gave a memorable performance by singing duets with The Voice season 10 winner Alisan Porter and guitarist and singer Colin Smith. Aguilera closed her showcase with her song «Fighter.» «This one is for Hillary because she is the ultimate fighter here tonight.»

Music legend Stevie Wonder closed the night with a surprise duet with Legend singing «Superstition.» «Tonight is a celebration of when Hillary Clinton becomes the next president.»

Clinton took the stage for a few minutes to thank the crowd and her celebrity friends for being all the love and support. «You are listening to some amazing presenters tonight who lift our spirits and point us in their direction and use their talents to do that. In the movies, on TV, their music, their artistry. And that’s how we want all of America to feel like. We want us to be part of a future that we’re proud of and helping to create.»