At a first glance, To All The Boys I’ve Loved Before – the new Netflix film that everyone is talking about right now – appears to be about the giddy embarrassment of first crushes. A coming-of-age flick cut from a similar cloth to all of the best teen movies, it takes apart the ways in which we sugar-coat the objects of our infatuations, as five old, embarrassingly-smitten love letters find their way into the outside world against their author’s will in the present day. It’s also a film about growing up. Over the course of the movie, Lara Jean Covey learns to express her true feelings, and finds her own assured place in the world. Starting out as an introverted character who eats lunch alone in the library, she’s quietly confident by the end.

The importance of To All The Boys I’ve Loved Before as a romantic comedy which stars an Asian-American lead character has been widely spoken about already, and quite rightly. In the film, the script knowingly drops a reference to John Hughes, the iconoclastic director behind The Breakfast Club, Pretty in Pink, and other staples of the ’80s high school movie genre. As well as paying homage to the classic teen flicks, TATBILB also manages to reappraise the ’80s films and their dodgy handling of racial representation at the same time as acknowledging their huge influence. “I’m sorry, but isn’t this character, Long… Dong… Duk, like, kinda racist?” asks Peter Kavinsky while they’re watching Hughes’ classic Sixteen Candles. 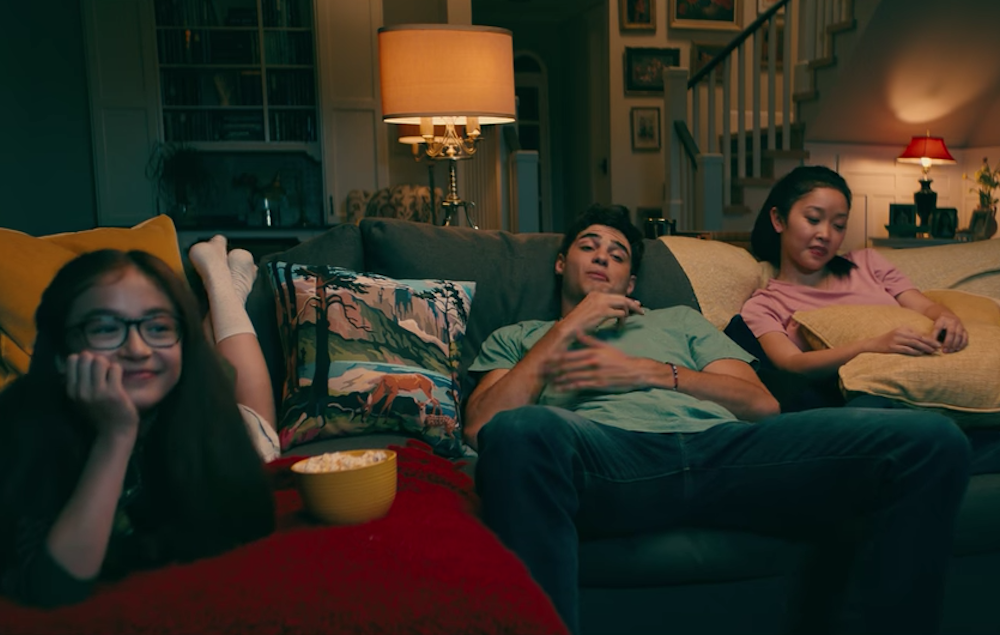 The people who help to raise you, those who become your family one way or another, are the same people who help to shape you as a person; that’s one reason why the presence of Lara Jean’s Korean culture is so vital to the film. To All The Boys I’ve Loved Before is also interested in the idea of upbringing as a whole, and in the opening sequence, it’s less a typical romantic comedy. Initially, we see Lara Jean’s father trying to create a love letter on a plate, addressed to his late wife and his kids.

In the opening minutes of the film, Lara Jean’s father struggles to cook the same Korean recipes that her late mother use to make on the regular. “I hate it when dad makes Korean food, it always tastes like butt,” complains her youngest sister Kitty. “I was still eating smushed peas when mum died.” As well as carefully handling the ways in which we borrow traditions from one another to connect, it’s a touching moment that perfectly encapsulates the difficult-to-navigate thorniness that is mourning for a lost parent.

Again and again this is a film concerned with revisiting loves from the past – usually romantic ones. When Lara Jean wrote her love letters, she was writing them to idealised, half-fictional versions to the real people they were addressed to. However, To All The Boys I’ve Loved Before is also addressed to Lara Jean’s mother, one of the biggest and most influential figures from her life.

For anybody who has ever lost a parent, the clumsy exchanges that pepper To All The Boys I’ve Loved Before will be all too familiar. In one such scene, when Lara Jean goes for dinner with Peter Kavinsky’s mum, she navigates a conversation about her family as the entire room freezes and turns the hue of a very ruddy looking beetroot. “Your mum must love having girls,” Peter’s mum says brightly as her son sideeyes her angrily. The ensuing slow-blink after she’s reminded that Lara Jean’s mother has died, followed by the immediate embarrassed apology, rings true to life.. After I lost my mum in my mid-20s, I felt like I had been signed up to a bleakly-named fictional society called the Dead Parents Club against my will. When you’re in this unlucky club, chatting with new acquaintances about the subject of family suddenly feels like treading on hundreds and thousands of very apologetic eggshells, with the usual scripts of small talk taken away. Nobody in life, it seems, really knows how to talk about death without being sorry.

“Actually, she did love having girls,” Lara Jean replies after an uncomfortable silence. You can see relief wash over Peter’s mum’s entire face. After dinner, when Peter apologises for a second time – honestly, when you’ve lost a parent people apologise to you, a hell of a lot – Lara Jean articulates complicated feelings that usually don’t find a place in lighthearted rom-coms. Telling Peter about the sudden flashes of guilt she experiences while washing up or doing her homework, she adds “honestly, it’s nice talking about her like it’s normal, like it’s not some tragedy”. It’s one of the key moments of the film that glues the initially unlikely pair together.

To All The Boys I’ve Loved Before frequently nails these difficult interactions with pinpoint accuracy; in a number of scenes Peter draws clunky but well meaning comparisons between the death of Lara Jean’s mum, and his dad leaving to start another family. “It’s hard, huh?” she agrees with him. Where romantic comedies can stick so rigidly to safe and soppy territory – think of Bridget Jones-type catchphrases like “I like you, very much. Just as you are” – To All The Boys I’ve Loved Before doesn’t shy away from exploring the ways in which people attempt to relate to each other’s alien situations, despite all of the barriers, when they’re falling in love. The film also explores different close relationships, too; as Lara Jean opens up to her dad about her massive dilemma (and lets be fair, having five cringeworthy love letters leaked into the outside world is a fairly large one) they end up discussing her mum instead. He comments that Lara Jean seems to have found happiness with Peter. “Seeing you come alive like that, you remind me of her,” he tells his daughter. In the diner, the pair of them put her mother’s favourite song, ‘Everybody Wants To Rule The World’, by Tears for Fears, on the jukebox. “There’s so much about her I should’ve told you girls, but I haven’t because just talking about her makes me sad. It’s not ok.”

It’s honestly refreshing to discover a rom-com that delves into permanent loss; the sad and darker consequence of love that we rarely speak about. “The more people that you let into your life, the more people there are that can just walk right out,” Lara Jean tells Peter, speaking about her letters, but also her mother. Over the film, as she gradually opens up, we also see her begin to heal.

This Article was originally Writing by: NME