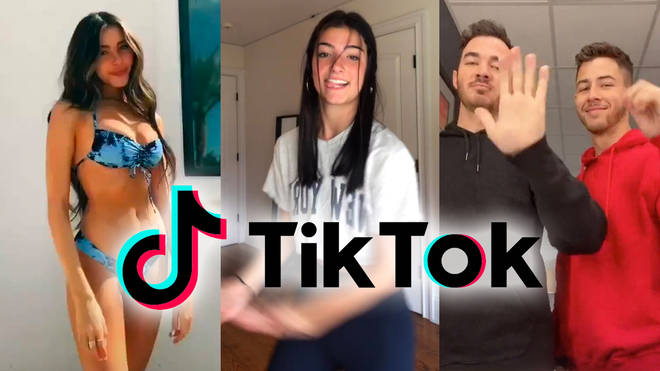 What song is used in your favourite TikTok? Here’s all of the most popular songs that have gone viral on TikTok in 2020, from Doja Cat’s ‘Say So’ dance challenge to Roddy Ricch’s ‘The Box’.

We love TikTok… but there’s just one issue. Often it’s near enough impossible to work out the name of *that* song being used in the latest viral TikTok trend.

So we’ve done the hard work for you and pulled together a list of all the most popular songs being used on TikTok right now – that’s all of the songs from the biggest viral TikTok dances and challenges all on one page. Neat.

OK, the stair shuffle dance challenge has been around for a while but it’s been brought back to everyone’s attention in 2020.

You might have seen Little Mix’s Perrie Edwards and her Liverpool and England footballer boyfriend Alex Oxlade-Chamberlain absolutely nailing this challenge as they were stuck indoors self-isolating.

The song might be familiar: ‘Pretty Girl’ was a huge hit for American singer Maggie Lindemann back in 2017 and it’s Paul Gannon remix that’s soundtracking this particular TikTok trend.

«Wow, you can really dance»

It’s one of the most popular trends on TikToks, where two people showcase their dance moves whilst miming to this song.

The original song isn’t actually a serious one – ‘Coincidance’ is a comedy track created by James Manzello – and there’s actually a pretty funny music video to go along with the full record.

This is one of those hugely popular TikTok trends that’s, er, sort of lacking a proper name! But you know the one – you stick your arms up and down and then ‘do the woah’ or something at the end?

Well, that song is actually a record by Dutch rappers Lil Kleine and Ronnie Flex, which went to Number 1 in the Netherlands way back in 2015 and has now become a TikTok hit.

The lyrics to the hook being used for the TikTok challenge are actually pretty random when you translate them from Dutch to English… we wonder if people have any idea what they’re dancing to….

You might have seen a load of famous faces dancing along to this catchy song from New Zealand singer BENEE.

Charli D’Amelio is one of the big names that helped kickstart the craze. The moves to the ‘Supalonely’ dance are fairly straight forward – it’s basically just mimicking the lyrics with your hands… easy enough, right?

Madison Beer also posted a video of her vibing to the song on her TikTok and it’s racked up over 20 million views so far.

«I just flipped the switch»

So this one involves two people standing in front of a mirror. The person in front does the filming and the person stood slightly behind is usually dancing away to the song.

Then when Drake says «I just flipped the switch» the video cuts and now the two people have switched positions (and often clothes) and are doing the reverse of what they were before.

Sure, we’ve probably badly explained that… but just check out the video below and you’ll get the idea soon enough.

«When I popped off, then your girl gave me just a little bit of lockjaw»

This is one of the hardest viral TikTok challenges out there and loads of celebrities have been trying to master it.

Basically, you have to try and quickly replicate a series of hand emojis on the screen, in time with the beat of the song. So that’s the OK symbol, the fist, the peace symbol… all the ones you’d find in your regular emoji keyboard.

Jonas Brothers are among the big names who’ve given it a go and, you know what, they nailed it…

«Day to night to morning, keep with me in the moment»

You’ll definitely know this song from American singer and rapper Doja Cat – it’s one of the biggest of 2020 so far!

Now this is seriously cool – the ‘Say So’ dance challenge was created by TikToker Haley Sharp, who has since amassed 1.3 million followers and then went on to star in Doja Cat’s official music video as a result!

James Charles and Charli D’Amelio are among the other big names that have given the dance a go on the app.

Roddy Ricch’s ‘The Box’ has been one of the biggest global hits of 2020 to-date – the track went to Number 1 in the US and the videos have clocked up hundreds of millions of views on YouTube.

So it’s not too surprising that ‘The Box’ has performed well on TikTok too. One of the biggest trends using the song is people mimicking the song’s intro with household items.

TikToker Jalaiah Harmon is the creator of the ‘Renegade challenge’, which started to take off in September last year.

Charli D’Amelio, Lizzo and Millie Bobby Brown are just some of the celebrities who have taken on the challenge but Jalaiah wasn’t really getting the recognition that she deserved for coming up with it in the first place.

However, that all changed when Jalaiah got to perform the dance at an NBA All Star game in America and Michelle Obama herself tweeted about it, writing: «Jalaiah, you crushed it—love seeing your talent shine!»

«And for dessert, I’ll suck your teeth»

Kesha’s 2010 track ‘Cannibal’ is now ten years old but that’s not stopped it being huge on TikTok in this decade.

TikToker Briana Hantsch choreographed a cool routine to the hook of the track, which includes the lines: «Your little heart goes pitter-patter, I want your liver on a platter, use your finger to stir my tea, and for dessert I’ll suck your teeth.»

Kesha herself has even given the dance a go, teaming up with the queen of TikTok Charli D’Amelio on a duet video.