A big congratulations is in store for Miranda Kerr…E! News can confirm the Victoria’s Secret model is engaged to billionaire Snapchat founder Evan Spiegel!

Kerr took to Instagram to share the big announcement, posting a bitmoji of the tech guru—who was named one of Forbes‘ youngest billionaires—getting down on one knee and proposing to the brunette beauty with the words «Marry Me!» written across. Behind the animated characters, Kerr shared a picture of the gorgeous engagement ring—a big round diamond with tapered baguettes.

«I said yes!!!» she captioned the cute photo with a bunch of smiling and heart emojis. 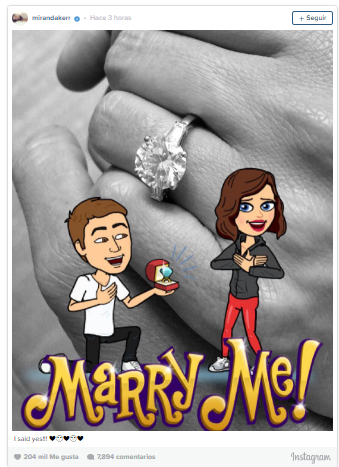 An insiders tells us, «Miranda is so excited to be engaged to Evan. She can’t wait to marry him…Once they get married they will start trying for children. That’s something they both want.»

As for the engagement, the source addd, «Evan surprised her when he proposed. It was done in a very romantic setting and he said very touching words while asking her.»

Kerr and Spiegel met at a work-related Louis Vuitton dinner party in New York back in 2014, and began dating in June of 2015. They made their red carpet debut at a pre-2016 Grammy Awards party this past February and finally made things Instagram official the following month.

Kerr has always gushed about her beau, telling E! News last November, «He’s just a really kind person and very genuine and very authentic and I really appreciate that about him,» she smiles. «And also he’s very intelligent.»

Not to mention, though the supermodel mom has a few years on her man, Kerr describes him as an old soul. «He’s 25, but he acts like he’s 50. He’s not out partying. He goes to work in Venice [Beach]. He comes home. We don’t go out,» Kerr explained her life with Spiegel to The Edit recently.

Kerr was previously married to Orlando Bloom for three years. They married in 2010 and subsequently split up in October of 2013.

Daily Mail was the first to report the engagement news.