Miss Party in the U.S.A. is ready to move the celebration to Australia — at least, if her latest tattoo is anything to go by.

Miley Cyrus showed off her newest addition to her tattoo collection in a photo posted to tattoo artist Doctor Woo’s Instagram. A jar of Vegemite, instantly recognizable to Aussies, joins a pufferfish, the planet Jupiter, an avocado, her grandmother, and 40 other small works of art on her body.

Vegemite, for those who don’t know, is a brown spread often used on bread and crackers made of «leftover brewers’ yeast extract with various vegetable and spice additives» — something you’ll be dared to try if you ever step foot Down Under. Miley may have been introduced to the polarizing snack by fiance Liam Hemsworth, one of the country’s most notable exports.

Of course, Vegemite took notice, with the product’s official Twitter account approving of her choice in tattoo. 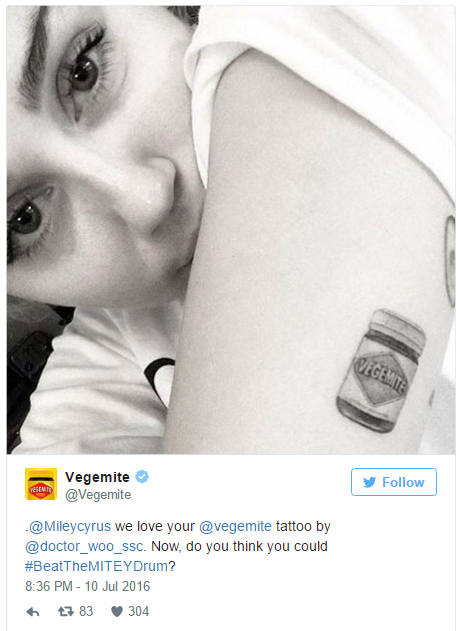