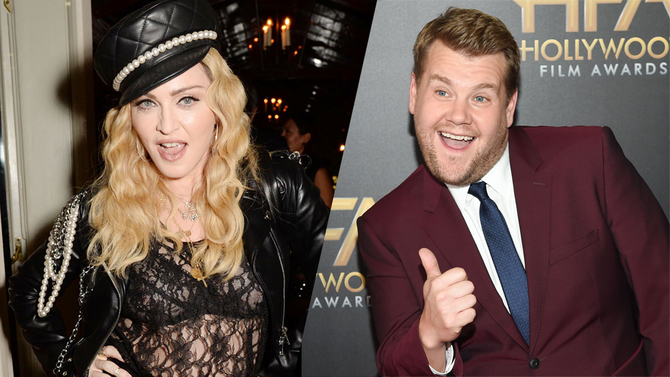 When a bus cuts them off in traffic, Madonna tries to convince Corden to «drive up next to bus, I want to give him what’s what.» When he refuses, she chides him for «letting people get away with bad behavior.»

She also argued against her «rebellious» reputation. «I’m quite square,» she told Corden. «My work is rebellious but my lifestyle is not rebellious.»

On her love life, Corden asked what she was looking for in a man, assuming she doesn’t «have a type.» «I think the best thing in the world is to be married to someone funny,» she said, but she told Corden he could step it up in the fashion department, calling his shirt «very Seattle 1990s.» Madonna also shocked Corden when she admitted to «full French kissing» Michael Jackson.

During the drive, they sang Madonna’s hits including «Vogue,» «Bitch I’m Madonna» (featuring the star twerking in the seat), «Papa Don’t Preach,» «Express Yourself» and «Ray of Light.» They even sang a bit of Madonna’s song from Evita, «Don’t Cry For Me Argentina.»