After spending four years in legal limbo, Kesha is making up for lost time. Since returning to the music scene, the glitter goddess has been releasing new music every couple of weeks — blessing us with “Praying” and “Woman” in the last month. The latest Rainbow buzz track is called “Learn To Let Go” and I think it’s my favorite yet. “Learn to Let Go…. it’s my motto. I love you animals, hope you love this song too,” she captioned a photo on social media. The serene image finds the pop star smelling a rose.

Produced by Ricky Reed, the uplifting pop/rock anthem picks up where she left off on Warrior — only the sound is looser and more organic. She’s also firing off truth bombs. “Had a boogieman under my bed, putting crazy thoughts inside my head,” Kesha sings in a verse. “Always whispering, ‘It’s all your fault.’” (Take that, Dr. Luke). However, while the song is clearly cathartic for her, it’s also universal and infinitely relatable. “The past can’t haunt me if I don’t let it, live and learn and never forget it,” she belts on the chorus. “Gotta learn to let it go.”

Kesha has really come back swinging. She is taking no prisoners lyrically and bolding experimenting with different genres. And that bravery is paying off. “Praying” debuted at an impressive number 25 on the Billboard Hot 100, but it should climb higher in the weeks to go. The Ryan Lewis-produced ballad is exploding at pop radio and closing in on the top 10 on iTunes. All the comeback queens is a couple of performances (get her on Ellen or Today) and she could be soon celebrating her first top 10 hit since “Timber.”

Watch the hitmaker’s “Learn To Let Go” video, which literally reconnects Kesha with her childhood, up top. 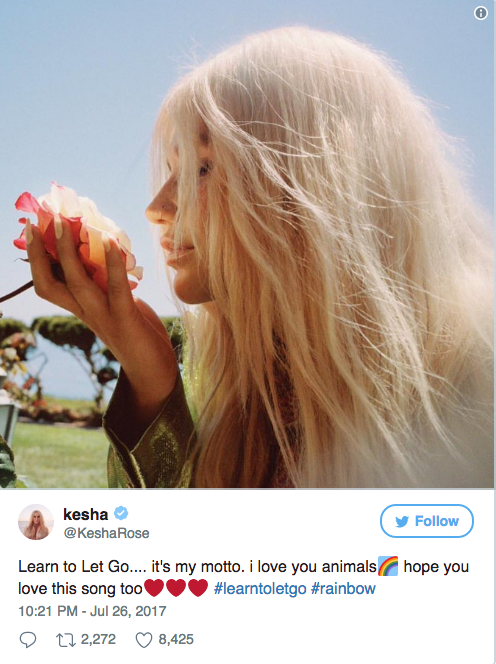