Today marked the season premiere of LIVE With Kelly, and with it came Michael Strahan’s notable absence and a promotion for Ripa. E! News has confirmed that Ripa has been promoted to executive producer alongside Michael Gelman. The show’s studio also received a little bit of an update, with new velvet chair covers and other aesthetic changes. «Wow, they spared no expense!» Ripa joked.

Although Strahan departed the show well before last season ended, his absence today shined a light on the obvious question: Who is going to replace him? But Morris Chestnut was on hand to serve as co-host in the premiere episode, and Chris Noth, Bradley Whitford and Martina McBride all appeared as guests. Chesnut and Ripa began the episode by talking about an experience they both shared this summer—sending their kids to college. Ripa and husband Mark Consuelos said goodbye to their son, Michael Consuelos, while Chestnut and his wife Pam Byse dropped off their daughter Paige Chestnut. 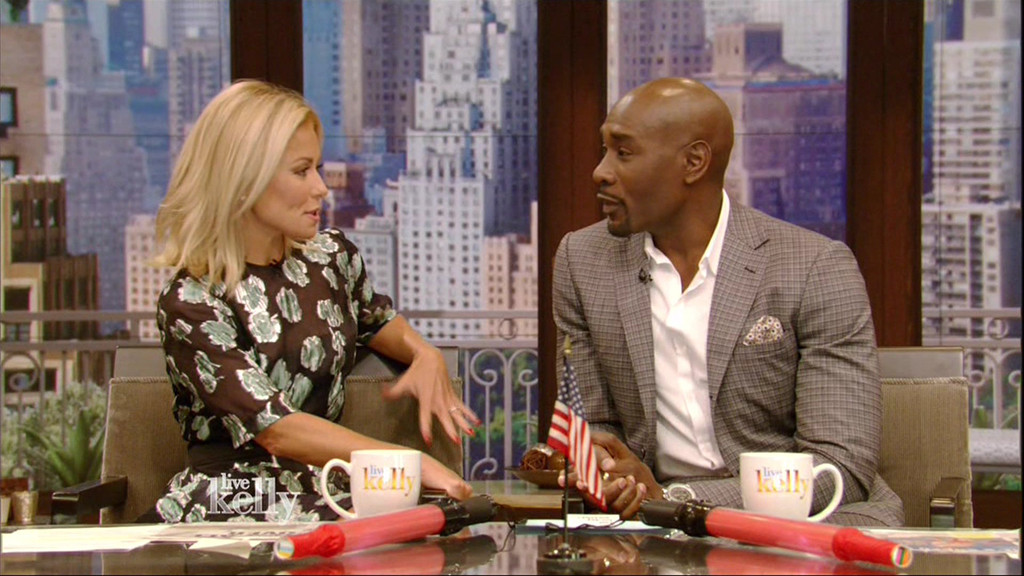 «My wife was very emotional,» Chestnut shared. «I got emotional when I saw her credit card bill. Every time I called she said, ‘I’m at Target picking up something for Paige’s dorm. I’m at whatever local store picking up something for Paige’s dorm.’ I got the bill back, and she must have been at the top-notch furniture stores. I think I might go there for vacation because I’m sure her room looks like the Ritz-Carlton.»

Ripa has had a slew of fill-in hosts, including Fred Savage, Anderson Cooper, Jeff Gordon, Rob Lowe and Andy Cohen, but as of Tuesday there has been no official announcement about who will land the coveted morning show role. In the meantime, Strahan begins his full-time gig atGood Morning America.

At one point during Tuesday’s show, Strahan sat on a couch next to Robin Roberts, George Stephanopoulos and Amy Robach and appeared to be quite comfortable in his new roll. With a smile on his face, Strahan seemed to be enjoying his new role.

After Strahan departed LIVE he revealed that he didn’t really have any regrets about leaving. «I really haven’t missed it,» Strahan said on the Netflix show Chelsea. «But I loved it. Don’t get me wrong. I loved it. When you get a break, sometimes you kind of go, ‘Wow, I kind of needed it.’ I needed a break.»

In an interview with DuJour magazine, posted a week after he left LIVE, Strahan said, «I loved being at LIVE. It’s a great show, great people and I’m very fortunate to have been a part of it.»

Formerly LIVE With Kelly and Michael, the show became LIVE With Kelly after Strahan left. Ripa was initially kept in dark about Strahan’s exit and was said to be «livid» and blindsided by his last-minute departure. Following the news, Ripa took four days off from her morning talk show, but when she returned to the show, she gave the audience some on-air zingers about the drama and her contract negotiations with ABC.