Less than a week after being hospitalized following an ATV accident, Jamie Lynn Spears‘ 8-year-old daughter Maddie is back home and recovering, PEOPLE confirms.

“Maddie Aldridge, 8-year-old daughter of entertainer Jamie Lynn Spears, has been discharged from Children’s Hospital in New Orleans,” the hospital tells PEOPLE in an exclusive statement via a Spears family rep. “She is breathing well and interacting with loved ones. Doctors say she is on the way to a full recovery.”

“Aldridge accidentally drove an ATV into a pond on a relative’s property in Kentwood, Louisiana, Sunday and was trapped underwater. Her family would like to thank Acadian Ambulance paramedics and Air Med helicopter crew for their life-saving response during the crucial moments after the accident,” continues the statement.

“They also extend their sincere gratitude to the doctors and staff of University Medical Center New Orleans as well as Children’s Hospital in New Orleans. The family has appreciated the thousands of people who have been praying for her recovery. They are touched by the outpouring of support they have received during this difficult time.” Maddie’s parents also confirmed the happy news on their Instagram accounts with a photo of the family flying home in a hospital helicopter. 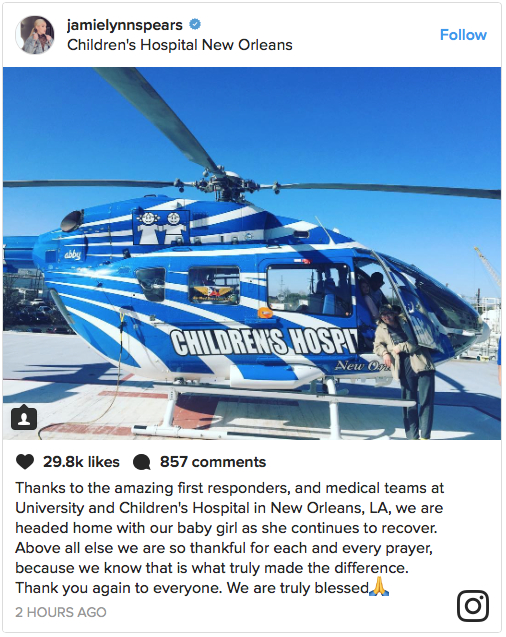 “Thanks to the amazing first responders, and medical teams at University and Children’s Hospital in New Orleans, Louisiana, we are headed home with our baby girl as she continued to recover,” they captioned the photo. “Above all else we are so thankful for each and every prayer, because we know that is what truly made the difference. Thank you again to everyone. We are truly blessed.” Aunt Britney Spears added, “So grateful that Maddie was able to go home today … it’s truly a miracle. Our prayers were heard, and they were answered. Thank you so much for all of your love and support this week. My family appreciates it more than you will ever know.