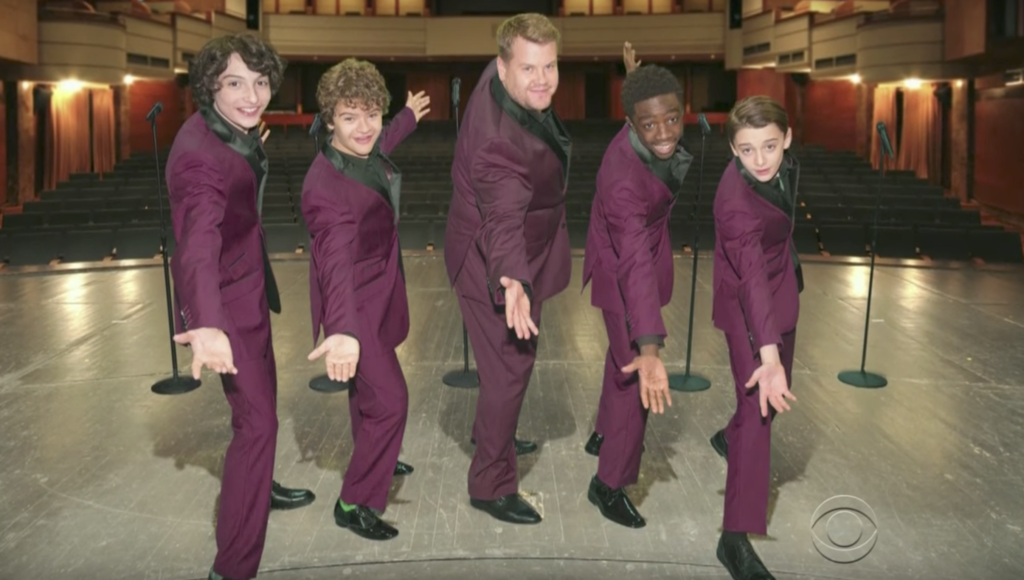 The Hawkins Five! Turns out the child stars of Stranger Things – Finn Wolfhard, Caleb McLaughlin, Gaten Matarazzo, and Noah Schnapp – have a musical past… well, sort of.

On Wednesday’s The Late Late Show, host James Corden revealed that he was once in a Motown cover band with the Netflix stars.

“People thought it was weird that James hung out with us because he was an adult, but we actually went to school with him. He was held back a couple of years, but we’re in the same grade,” Wolfhard jokingly explained during the clip.

“The boys and I, we have so much in common. We love playing video games, we all like taking naps, most importantly, we all love Motown,” Corden said. “We sold out a retirement home for old folks and we killed. We killed, literally.”

When the group all went in to audition for Stranger Things – with Corden going “method” as Eleven, the British host was bummed to be the only one not cast.

“I’ll be fine as long as I don’t end up wearing a suit and sitting behind a desk,” he quipped.

And though the boys went on to have great success, McLaughlin noted, “That band was still the most creatively fulfilling thing I’ve ever been a part of.”

So “The Upside Downs” reunited for an epic performance on the CBS show, which featured a medley of songs from The Jackson 5, The Temptations, and The Four Tops. Turns out, the boys have some killer moves.