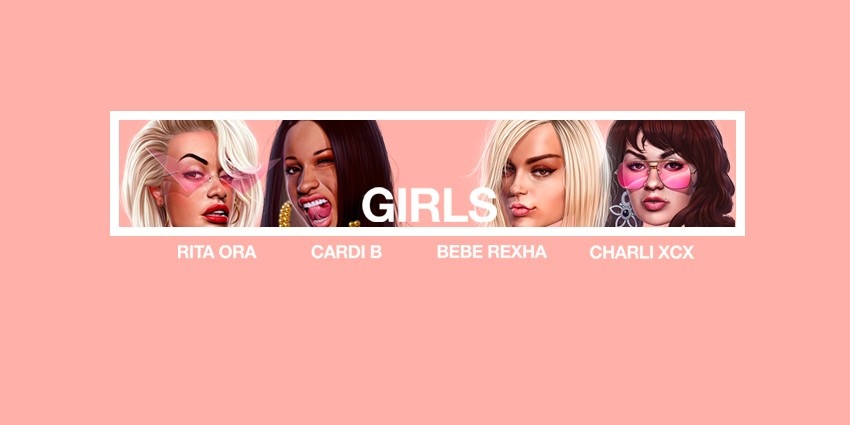 Rita Ora is gearing up to ride her latest anthem to the top of the charts. The Brit teamed up with Cardi B, Charli XCX and Bebe Rexha to unveil their collaborative single “Girls,” and it is a distinctly fun and flirty bop. Released today (May 11), it fulfills a promise she first made in November of 2017. After months of anticipation, the “Anywhere” siren finally announced the release date last week. And she makes up for lost time with a treat that is all but guaranteed to be a contender for the title of Song Of The Summer. Unsurprisingly, the quartet have a breezy serving of pop perfection on their hands.

“Her name is Lara, we learned a lotta. How to do it, like we do it, like we wanna. We just know, we just know. I ain’t one sided. I’m open-minded,” Rita coos over a sugary production. Bebe and Charli trade off lines on the second verse, and they all find an easy chemistry on the instantly addictive chorus. “Sometimes I just wanna kiss girls, girls, girls,” the group sings in harmony. Possessing some of the most distinctive voices in pop, it is refreshing to hear them all blending so well. Cardi’s verse is equally fun and manages to reference both Cyndi Lauper’s “Girls Just Wanna Have Fun” and Destiny’s Child’s “Say My Name.”

Boasting one of the year’s most joyful productions and the collective might of four pop powerhouses, “Girls” is all but guaranteed to enjoy a massive run on the charts. Everything Cardi touches turns to gold, and Bebe is soaring high after the meteoric success of “Meant To Be.”Given Rita and Charli’s popularity at home, they are all but guaranteed a future #1 in the UK. Keep an eye peeled for a video, which is sure to drop soon. Based on a teaser Rita posted on Twitter, it looks like a vibrant affair. Give the bop a spin below!