Halsey recently hit out at the MTV VMA’s after her absence sparked speculation from fans. The ‘Hopeless Fountain Kingdom‘ singer responded on social media, explaining that she’d grown frustrated after failing to receive a single nomination despite directing all of her recent music videos.

Halsey tweeted: “I directed all my own music videos this album just to have @MTV “#wcw” me to death and not nominate me for anything so it didn’t feel right to go. I’m happy you guys liked the videos. That’s all that matters to me.”

She continued: “I’m eager to continue the upcoming passage of time dedicating myself to my art and my career, and the duration of my tour. I wish him the best. Thanks for respecting our privacy at this time.” 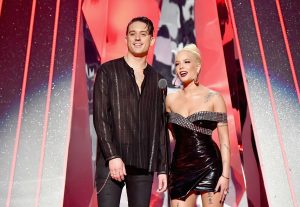 G-Eazy (L) and Halsey speak onstage during the 2018 iHeartRadio Music Awards at The Forum on March 11, 2018 in Inglewood, California. Credit – Jeff Kravitz/Getty Images for iHeartMedia

However, the couple now seem to have reconciled their differences after the two appeared on stage together last Friday (August 31) in New Jersey as part of G-Eazy’s ‘Endless Summer’ tour.

Halsey joined G-Eazy on stage during a performance of ‘Him & I’, their collaboration from December 2017. After kissing on stage, G-Eazy later shared photos of him and Halsey on social media. Halsey has also shared pictures of her and G-Eazy on social media today (September 3). Recently, as reported in Stereogum, Halsey told Us that she and G-Easy were “hanging out again.”

Meanwhile, the feud between G-Eazy and Machine Gun Kelly continues as the two continue to spat over social media and song thanks to their shared interest in Halsey.

Recently on ‘Bad Boy’, G-Eazy rapped “MGK please stop trolling me, get over me / You wanna be me…Call a Uber, turn on the radio, imagine hearing me / ‘Him & I’s” on, mad you’re listening to Halsey sing to me…”

After the release, Machine Gun Kelly then shared photos of him and G-Eazy sporting similar hairstyles. The photo was captioned “I f***** his girl now he looks like me this shit overbearing”. The caption was later deleted and updated to “#miniME#stoplyingaboutFINLAND#alllyourfriendsknow.”