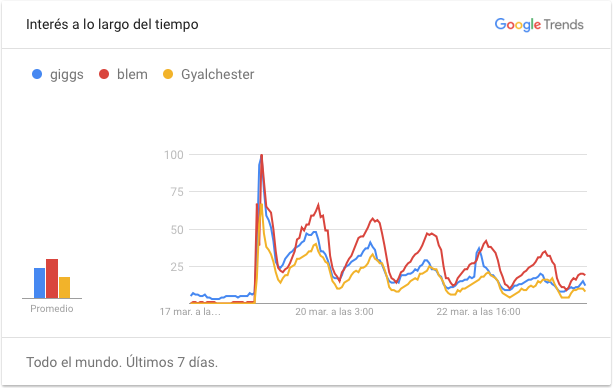 As it turns out, Drake is still pretty popular, once again shattering streaming records on the back of his 22-track playlist behemoth, which was released last Saturday night (March 18). He’s also popular enough to send listeners scrambling to Google for the meanings behind a few key terms from the album, namely, track titles “Blem” and “Gyalchester,” and Giggs, the featured guest on two additional tracks.

Taking a look at this extremely scientific graph, courtesy of Google Trends, we can see that on March 18, at approximately 5 p.m. EST, very few people were searching for “Blem,” “Gyalchester” or Giggs. Since the 6 God had not yet blessed the world with a formal introduction to these terms, why would they? However, at 6 p.m. EST, when the album premiered via OVO Sound Radio, a veritable shit ton of people were searching for all three.

For those that dun kno, eh, Giggs is a London rapper signed to XL Recordings, who released his fourth studio album Landlord last year. Don’t call him a grime artist.

Blem (aka track seven), according to Urban Dictionary, is apparently the act of being high off marijuana, which in addition to sounding exactly like something a cop would say also makes sense in that Drake might just say how he feels, as he’s blem for real. Then again he mentions his own Virginia Black whiskey in the song’s intro, so he might just be drunk. Maybe he’s drunk and high, maybe he’s one or the other, or maybe I’m just too blem to figure it out, but regardless, Drake is blem and the previously uncultured want to know why.

Gyalchester (aka track nine), is apparently «the well-known nickname for the parish of Manchester, Jamaica, West Indies.» It’s ‘Gyal’ instead of ‘Man’ because there are beautiful women in the area, and Drake loves beautiful women, along with Jamaica, so it makes sense that he would use it to name a song that doesn’t mention the area at all. Then again, Genius says that Manchester, England also sports the nickname, though I cannot confirm that fact nor confirm which country Drake is referring to (he loves England, too).

While other terms/song titles like «Jorja,» «KMT,» «4422» and others also saw an increase in searches post-More Life release, none had quite the same draw as «Blem,» «Giggs» and «Gyalchester.»

Drake’s faced a lot of criticism for «borrowing» too heavily from England and the Caribbean for slang and influences, yet it’s clear it doesn’t phase him much, as his latest project continues his mission to prove to the world that he’s a worldly man while he’s giving us more chune for our headtops.