After a half an hour of waiting outside Break Room 86, an intimate cocktail lounge tucked discreetly within Central Los Angeles’s Koreatown, the Lovatics are growing restless. And the crew knows it.

It’s the «Lovatics First Listen Party» for Demi Lovato’s newly released single «Sorry Not Sorry» — which took place Monday night (July 10) just hours before Lovato dropped the song at midnight — but Lovato has yet to be seen. Anxious teenagers and young adults, wearing skinny jeans and floral prints and baseball caps emblazoned with «Confident,» occupy themselves by Snapchatting selfies using the custom event sticker. They sip drinks and take pictures of the lounge’s cassette-tape and vintage TV-tiled walls, ignoring the occasional jostle caused by a crew member scrambling through the crowd.

For a minute there’s silence as the DJ seems to fiddle with his equipment. «Maybe we went too soon,» one crew member whispers. But then, the helmeted enigma begins to play, and the crowd begins to bop along, albeit reservedly.

Break Room 86 is small, so when Lovato does enter the venue it’s through a narrow gap in the fans eagerly awaiting her. Still, she manages to slip in almost unnoticed, flanked by the members of her entourage and camouflaged in dark eye makeup and an oversized flannel. Offstage, she could be just one of the many long-haired girls in fashionable, but casual, concert-wear.

But when the former Disney Channel actress does take the magenta-lit stage, it’s her voice — uniquely powerful and fragile, pitch-perfect and trembling — that reminds the audience just why she is the pop star she is today. Opening with «Confident» and «Cool for the Summer,» Lovato at first seems a little unsteady, until she appears to recognize a familiar face in the crowd. She grins immediately, points at the unidentified acquaintance, and her slightly-wavering voice kicks into high gear, mirrored by two back-up singers in matching black tank tops and chokers.

While the occasion was definitely focused on the music, Lovato did take the opportunity to joke, teasing that she had a «surprise» for the audience: «I’m getting naked!» The «Skyscraper» singer did not, in fact, strip — the surprise was a guest appearance by electronic DJ trio Cheat Codes, to perform their Billboard Hot 100 hit «No Promises.»

The finale was, of course, the first live performance of «Sorry Not Sorry.» According to Lovato, she’d only just rehearsed the single for the first time that day, yet her delivery was almost seamless, both sultry and energetic and consistently on-key. She seemed the most herself during this performance than any other, visibly relaxed and comfortable on the small stage as she belted into the microphone and twisted her hips to the beat.

When the single drew to a close, Lovato thanked the applausing crowd with a cheerful: «What do you say we dance?» before bouncing into the sea of fans, her location only discernible by the mass of phones periscoping above her.

She «danced» her way through the Lovatics to the door, pausing one last time to wave goodbye before disappearing for the night. 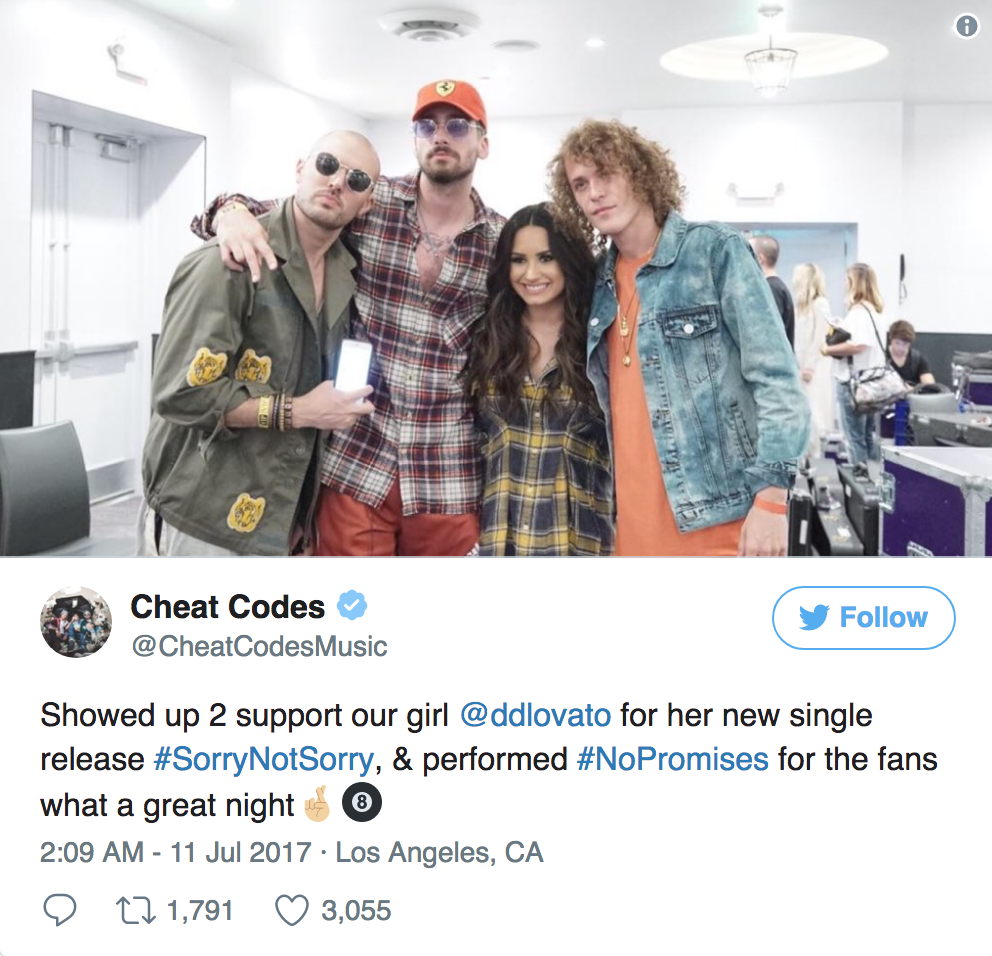