Rihanna is shining bright light a diamond and Chris Brown can’t seem to look away.

On Monday night, Rihanna posted one of her outfits from the annual event with a standard caption.

Through all the likes and comments from fans and followers, one message stood out from all the rest. As it turns out, ex-boyfriend Chris decided to comment with two eye emoji’s. 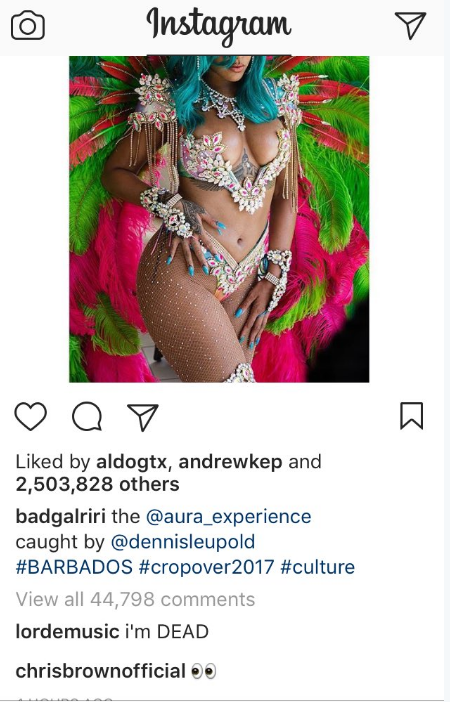 In less than an hour, more than 4,000 people had liked the comment. As the same time, there were plenty of naysayers who were left wondering why he wanted to leave his mark.

«PLs keep your negative energy away from Rihanna @ChrisBrownOfficial,» one follower wrote. Another added, «Chris gtfo.»

One fan took it a step further and brought ex-boyfriend Drake into the mix. «@champagnepapi so you just gonna let Breezy comment on your girl’s pic like it’s all good?» the follower asked.

As pop culture followers know, Rihanna was a victim of an assault at the hands of Chris back in 2009. It resulted in a makeup and then a final breakup.

«You realize after a while that in that situation you’re the enemy. You want the best for them, but if you remind them of their failures, or if you remind them of bad moments in their life, or even if you say I’m willing to put up with something, they think less of you—because they know you don’t deserve what they’re going to give,» Rihanna shared in Vanity Fair. «And if you put up with it, maybe you are agreeing that you [deserve] this, and that’s when I finally had to say, ‘Uh-oh, I was stupid thinking I was built for this.’ Sometimes you just have to walk away.»

She added, «I don’t hate him. I will care about him until the day I die. We’re not friends, but it’s not like we’re enemies. We don’t have much of a relationship now.»