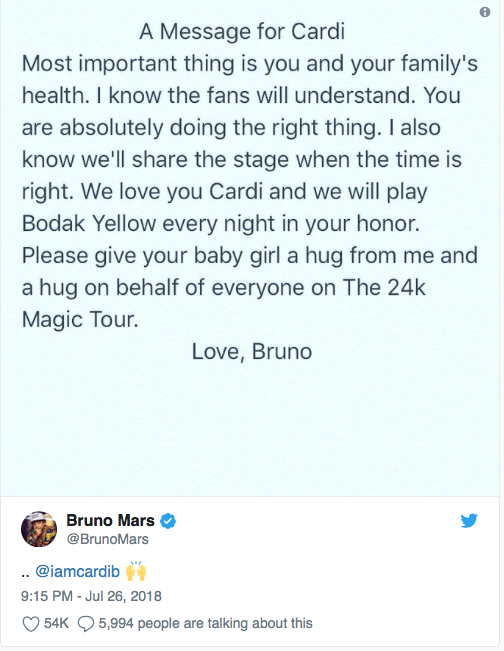 On Thursday night (July 26), the «I Like It» rapper announced that she’ll no longer be joining Bruno Mars on the last leg of his 24K Magic tour. Cardi’s guest spot was announced back in February, but after welcoming her first child, a daughter named Kulture, on July 10, Cardi admitted that she «underestimated this whole mommy thing» and wasn’t ready to hit the stage.»Not only am I not just not ready physically, I’m not ready to leave my baby behind since the doctors explained it’s not healthy for her to be on the road,» she wrote on Twitter.
She added, «I hope you guys understand that this decision has been the hardest to make but I have to do what’s best for myself and my baby!»

Cardi elaborated on her decision on Instagram Live, opening up about the struggles she’s faced as a new mother. She explained, «That postpartum shit is really real, y’all. … I respect mothers more than ever now. I see moms differently, especially the young ones that barely have experience and money. I don’t know how they do it.»Those struggles aside, the chart-topping rapper added that she’s loving life as a new mom and simply can’t bear the thought of being away from Kulture.

«She just melts me,» Cardi gushed. «I don’t feel like nobody can tend to my baby like I can.» As for Mars, he hasn’t announced a replacement for Cardi, but he did share some kind words for his «Finesse» collaborator, writing, «I know the fans will understand. You are absolutely doing the right thing.