David Bowie‘s friends and former bandmates will get together on what would have been the singer’s 70th birthday on January 8 for a celebration of the singer’s life and music. The UK event will feature music by 30 musicians from throughout Bowie’s career. According to NME, the show at the Brixton Academy will be hosted by actor and Bowie friend Gary Oldman and is the first of a series of gigs around the world that will «take place in cities that have a strong connection with David Bowie and his work.»

Each of the shows will reportedly be anchored by 30 core musicians teaming up with «40 or more local musicians» for a run through the singer’s work. The London gig will feature musicians who played on Bowie’s final albums, The Next Day and Blackstar, along with former collaborators including: Mike Garson, Earl Slick, Adrian Belew, Mark Plati, Gerry Leonard, Gail Ann Dorsey, Sterling Campbell, Zachary Alford, Holly Palmer and Catherine Russell, with more guests to be named later. 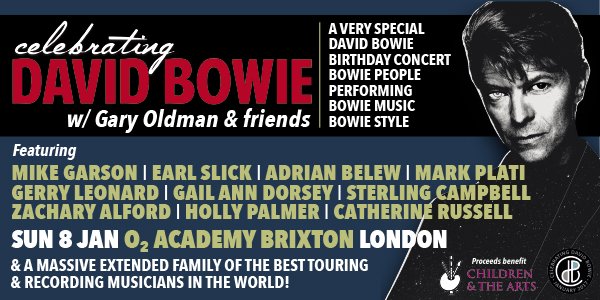