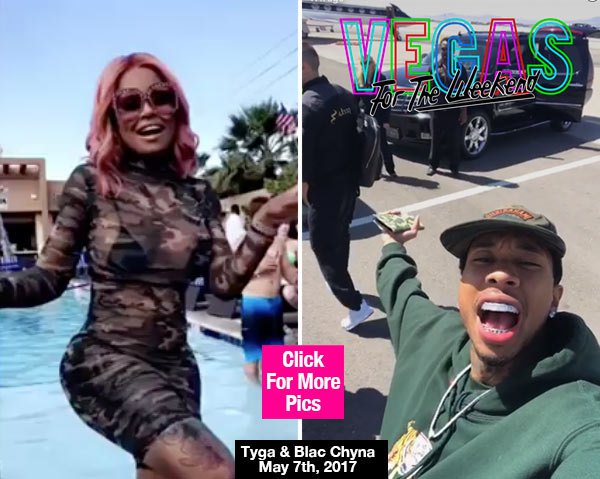 What happens in Vegas, stays in Vegas — unless you’re Blac Chyna and Tyga! The former couple were both spotted in Sin City over the weekend of March 6 and are now reigniting rumors of a possible romance due to their very close proximity.

Viva Las Vegas! Blac Chyna, 28, and Tyga, 27, went their separate ways a long time ago. But now that each of them have broken off a relationship with a member of the Kardashian-Jenner clan, it seems they may be finding their way back to each other.

The two were both spotted in Las Vegas over the weekend of March 6 and we have a hard time believing that these two being in the same place at the same time for the SECOND weekend in a row is an act of serendipity.

Both stars took to Snapchat to show off how much fun they were having in Sin City. Chyna shared a pic of some gorgeous pink and white strappy heels with the caption “Vegas” written on the pic with a heart.

Tyga opted for a pic of himself enjoying the city, snapping a selfie while showing off his grill and adding the “Vegas For The Weekend” geofilter to the snap. While we didn’t see any pics of the pair together, we are starting to get mighty suspicious. After all, they were both seen at the same club in Miami last weekend and the timing of these trips just seem too perfect to be coincidental!  And it doesn’t seem like they are trying to hide it either with all that snapping!