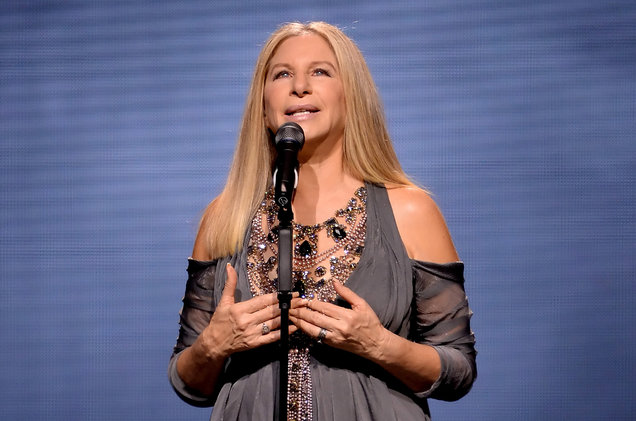 Barbra Streisand has scored the seventh No. 1 of her 50-year U.K. album chart career. Encore — Movie Partners Sing Broadway (Columbia/Sony) entered today’s new countdown at the top with combined units of 20,000, according to the Official Charts Company.

The new singles chart had “Closer” (Disruptor) by Chainsmokers, featuring Halsey, climbing 3-1 to repeat its Hot 100 success and end the five-week reign of “Cold Water” (Because Music), by Major Lazer, featuring Justin Bieber and MØ.

Streisand first made the U.K. album chart in January 1966 with My Name Is Barbra Two; her first No. 1 was the soundtrack to A Star Is Born with Kris Kristofferson in 1977, which was followed to the top by Greatest Hits Vol. 2 in 1979, Guilty (1980),Love Songs (1982), The Essential Barbra Streisand (2002), and Love Is The Answer(2009). The new victory consolidates her position in second place among female solo artists with the most chart-topping albums in the territory, behind Madonnawith 12.

Britney Spears started at No. 2 on the new album listing with Glory (RCA/Sony). It’s the fifth time she’s had an album reach the runner-up spot in the U.K., back to herBaby One More Time debut of 1999, but Spears has never a No. 1 album there. Last week’s No. 1, Frank Ocean’s Blonde (Boys Don’t Cry), fell to No. 3 and Dolly Parton’sPure & Simple (RCA Nashville/Sony) 2-4.

U.S. duo Twenty One Pilots climbed 11-5 with Blurryface (Atlantic/Warner Music), a new peak in the week it completed a non-consecutive year on the U.K. chart. In the wake of their headline appearances at the Reading and Leeds Festivals, BiffyClyro’s Ellipsis (14th Floor/Warner Music), which debuted at No. 1 in July, rebounded 19-10.

Chainsmokers’ first No. 1 single arrived with combined units of 80,000, ahead of “Let Me Love You” (Interscope/Universal) by DJ Snake, featuring Bieber, which started a fourth week at No. 2. With Bieber’s other guest appearance on the Major Lazer single down to No. 3, Calum Scott’s “Dancing On My Own” (Instrumental) held at No. 4 and “Heathens” (Atlantic/Warner Music) by Twenty One Pilots at No. 5.