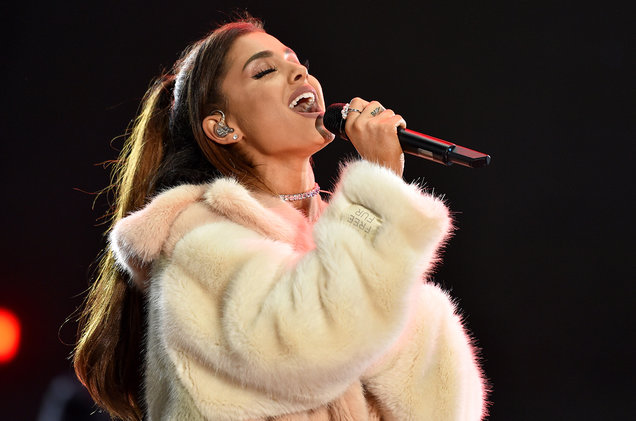 The Grammy-winning singer-actress has joined the cast of NBC’s Hairspray Live!, she announced on Twitter, and will play the role of Penny Pingleton.

«Penny has been a dream role since Hairspray opened on Broadway,» tweeted Grande of playing Tracy Turnblad’s incorrigible best friend, a role played by Leslie Ann Powers and Amanda Bynes in the 1988 and 2007 films, respectively.

To Kerry Butler, who also originated the Broadway role in the 2002 production, she said, «Hope to make you proud.»

Grande joins a star-studded cast, including Martin Short, Derek Hough, Harvey Fierstein, Kristin Chenoweth and Jennifer Hudson. Known widely onscreen for her Nickelodeon roles, she first made her Broadway debut in the musical 13.

«We’re absolutely thrilled to round out our all-star ‘Hairspray Live!’ cast with Ariana Grande, one of the biggest recording artists in the world,» said Robert Greenblatt, Chairman, NBC Entertainment. «She’s also a Broadway baby at heart, having debuted on Broadway when she was 15, and will be fantastic in the delightful role of Penny Pingleton. We look forward to her millions of fans seeing yet another side to this multifaceted performer and we welcome her to this incredible ensemble of artists.»

Based on the Tony Award-winning Broadway musical, Hairspray Live! takes place in 1962 Baltimore. Teenager Tracy Turnblad’s dream is to dance on The Corny Collins Show, a local TV program, so when she wins a role on the show, she becomes a celebrity overnight and meets a colorful array of characters, including the resident dreamboat, Link; the ambitious mean girl, Amber; an African-American boy, Seaweed, in detention; and Seaweed’s mother, Motormouth Maybelle, the owner of a local record store. Tracy’s mother is the indomitable Edna Turnblad, and she eventually encourages Tracy on her campaign to integrate the all-white Corny Collins Show.

Fierstein also is writing the teleplay for the production, which hails from executive producers Craig Zadan and Neil Meron. The duo have been behind the past three live musical productions on NBC — The Sound of Music, Peter Pan and The Wiz, which produced impressive ratings for the network in December. Zadan and Meron will be joined by The Wiz Live! director Kenny Leon, live television director Alex Rudzinski and choreographer Jerry Mitchell (Kinky Boots).

Hairspray Live! is set to air Wednesday, Dec. 7, at 8 p.m. ET and marks the first time NBC’s live musical will be filmed in Los Angeles.

«I’ve never been more excited for anything in my entire life,» Grande added on Instagram. 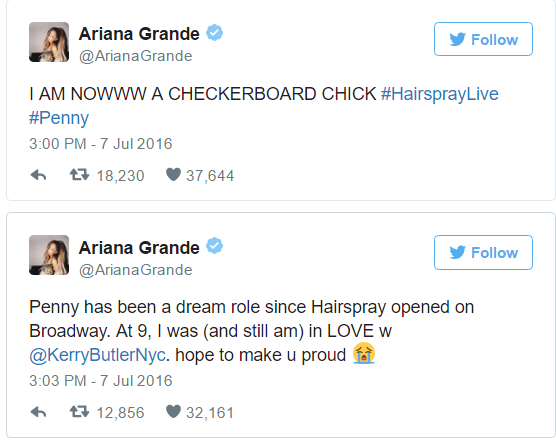 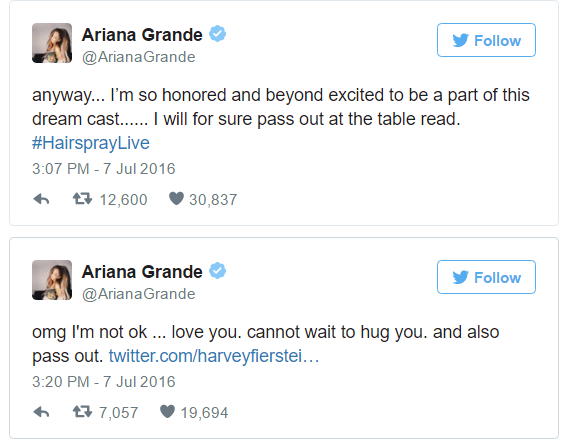