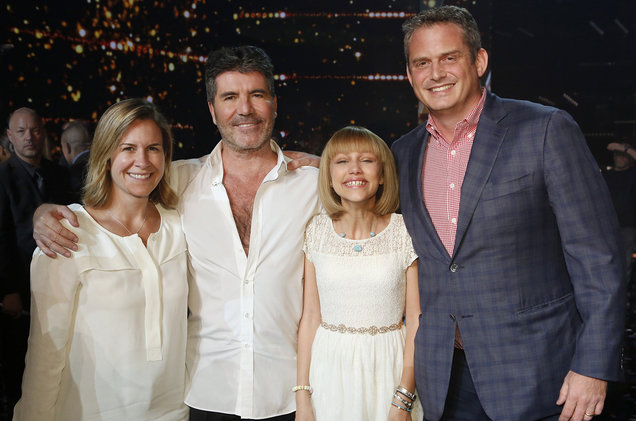 The 12-year-old singer and ukulele player — who became a sensation from her very first audition when judge Howie Mandel hit the coveted Golden Buzzer — will see her deal with Simon Cowell’s Syco Music land at Sony Music’s Columbia Records, Billboard confirms. There, VanderWaal will be labelmates with Adele, One Direction, Beyonce, Bruce Springsteen, Barbra Streisand and more.

While on America’s Got Talent, VanderWaal earned praise from Stevie Nicks, who told host Nick Cannon: «she reminds me a lot of me in a lot of ways. She’s got it. Whatever happens, Grace is going to the top.»

Dubbed «the next Taylor Swift» by Cowell, that same superstar singer even sent VanderWaal a huge bouquet of flowers to wish her congratulations.

Speaking to Billboard, Cowell said all this excitement is only the beginning for the preteen.

«It’s a lot to take in, but I’ve got to hand it to her,» he said. «She’s a very smart, calm, focused girl and I think she knows what she wants to achieve and what we always say to artists in this situation is it’s not a race.»

VanderWaal is set to headline three dates inside the PH Showroom at Planet Hollywood Resort and Casino in Las Vegas Oct. 27 through Oct. 29 with AGT acts The Clairyvoyants and Tape Face.

While those three dates are the only announced shows so far, Cowell promises something else is in the works.

«There is something. A much, much bigger announcement coming soon, which is separate from this,» he teased. «But that will be for, I’m guessing, 18 months time. But for the moment it is the short term residency for those three acts. That’s the only commitment so far.»